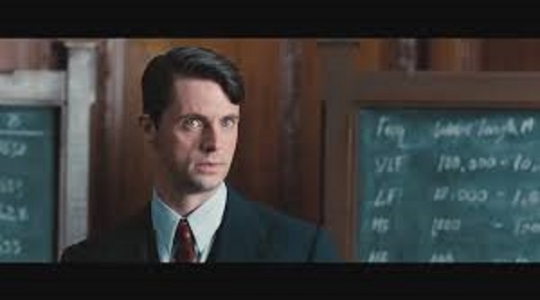 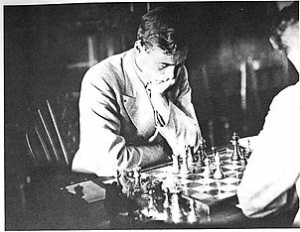 Asking someone who has been playing tournament chess for well over thirty years for his favourite game, is rather like asking an ageing Lothario about his favourite girlfriend. He will have forgotten most of them, your question will plunge him into a state of nostalgic melancholy, and he probably cherishes an unconfessed illusion that he might encounter the favourite one tomorrow. Finally, if you do persuade him to name a favourite, she will be neither the best, the most beautiful, nor the most interesting; and his choice will be incomprehensible to everyone but himself.

All this applies, mutatis mutandis, to games of chess. One likes them for so many different reasons. The pride of beating a great master makes all victories of this kind a source of permanent pleasure; incidentally, applying this in reverse, I always take it as a gratifying compliment when my victorious opponents show undue elation at the result. Winning a key game in a tournament is satisfactory in the same sort of way. To win a brilliancy is of course pleasant, though there is more credit and in some ways more satisfaction in winning a hard defensive struggle or a difficult endgame. There must be a great satisfaction in winning a hard game against a strong player in which one could feel quite satisfied with every move one made: I have never in my life had this experience. I think on balance that my favourite games are those with a touch of queerness about them – where one reaches unusual or original positions. From among these, I have chosen my game with T.H. Tylor at Hastings 1937–38: this tournament as it happens is the one in which I think I achieved my best result, being second equal with Keres, half a point behind Reshevsky, and ahead of Fine, Flohr and Mikenas. The game with Tylor was played in the seventh round. 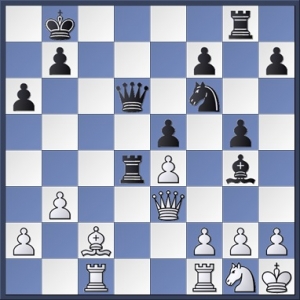 White has played an indifferent opening and early middlegame, and as a result Black has command of the board. However, White now threatens to play f3 followed by Ne2 and then Rfd1. If he succeeds in doing this, he will free his game and the position might even react against Black whose pawn position is a little loose. In such positions vigorous play is usually essential to preserve the advantage; so, 21…Nh5 22 h3 With this natural move Tylor may have missed his last chance of saving the game. The trouble with the move (played of course to drive the bishop from its guard of e2 and d1) is that it fatally weakens the defensive position of the king: White should have played his originally planned move of f3. He rejected this because of the variation 22 f3 Ng3+ 23 hxg3 Qh6+ 24 Nh3 Bxh3 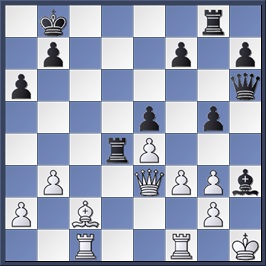 25 gxh3 Qxh3+ and mate in a few moves – I wonder if you can see the flaw in this? It is that if White simply refrains from recapturing the bishop on move 25, there is no mate and indeed no clear win. Very easy to miss! 22 Bd7 23 Ne2 g4 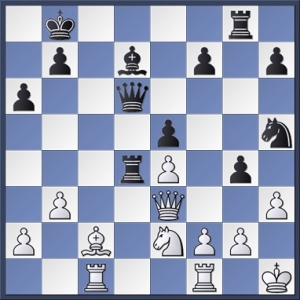 A positional sacrifice of the exchange, made on general grounds, which seems to be analytically sound. I can’t go into all the numerous variations here; but to give a couple we might take (a) 24 hxg4 Bxg4 25 Nxd4 exd4 26 Qd2 Bf3 27 gxf3 Nf4 and (b) 24 Nxd4 exd4 25 Qd2 gxh3 26 g3 Qe5 27 Rcd1 Qf6! and wins. I might mention in passing that many sacrifices in attacking positions are of this kind – made on judgement backed by partial but not exhaustive analysis; it is curious that so many players seem slightly ashamed of this, and pretend that all the variations subsequently discovered in analysis were foreseen in detail – even the great Alekhine was not above this on occasion. My own view is that good judgement rates at least as high in chess as accurate analysis. 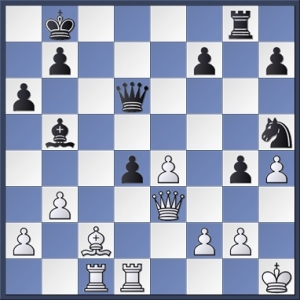 This brings me to one of my reasons for being fond of this game – it has always seemed to me that there is a charm of economy and unexpectedness in attacks which survive the exchange of queens; it is a common error to imagine that the interest goes out of the game when the queens come off, and I always like to see it disproved yet again. 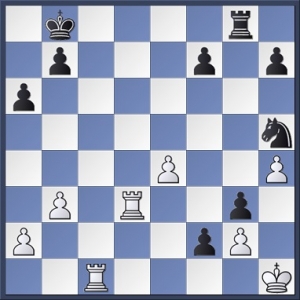 Here I failed to find the quickest win  – mainly I think because I had seen an alternative win and went for it without looking for anything else: this quickest line was to play 30…Rg4 anyway and after 31 Rxh5 Rxe4, mate in a few moves is inevitable – a remarkable demonstration of the power of two pawns, which is exemplified in a slightly different way by the line actually chosen. 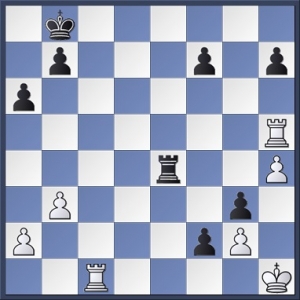 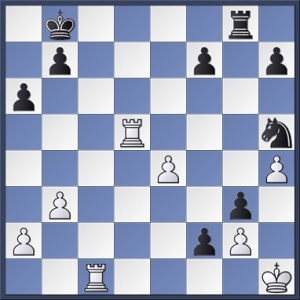 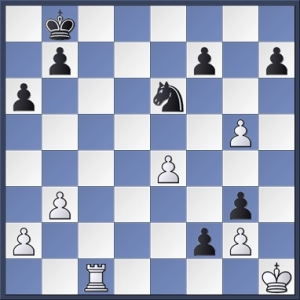 Why? Because these two pawns render the White rook and the king permanently helpless; Black can wander round undisturbed with his knight, picking up as many pawns as he likes, and finally playing to e1 – or play to f4 then advance the h-pawn to h3. In fact, even if the knight were off the board Black could win with king alone. Trying to analyse why  am so fond of this game, I think that what pleases me chiefly is the extraordinary permanence of the grip of the two black pawns – that without the aid of any of the pieces they can indefinitely control the rook and king; and the position combines economy with a touch of the bizarre in a way that I think I would find attractive even if it were somebody else’s game. 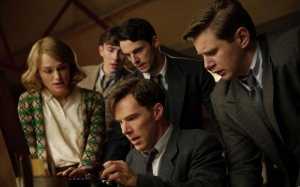 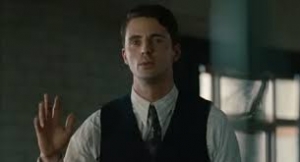 Hugh Alexander features in The Imitation Game, a forthcoming film about Alan Turing and the Enigma code-breakers of the Second World War. The publicity describes him as ‘a ladies’ man’.