‘The high-voltage board’: Arthur Koestler on chess

‘Chess is a game too noble to be left to the chess-players.’

So wrote Arthur Koestler, covering the Fischer–Spassky match for the Sunday Times in 1972. So bitter had he found the pre-match shenanigans that he likened his job to that of war correspondent. Of his two reports on the match, ‘Reflections of an Addict’, on the ‘scandalous preliminaries’ to Reykjavik, is the most interesting. Snapshots of the players and evocations of the game’s drama and allure reveal a genuine enthusiast, a ‘passionate duffer’. The second report, a narrative of the match itself, concludes with a discussion of computers and artificial intelligence which, forty years on, seems remarkably quaint.

‘Both are wonderfully cast for their roles; Fischer the rugged individualist, adventurous and occasionally reckless both in his life-style and chess-style; Spassky the more benign type of Soviet bureaucrat, cautious, non-committal, evasive.

Poor Bobby. He does not drink, does not read, takes no interest in women, or music, or nature. He lives in hotel rooms out of two large plastic suitcases. A reporter once asked him what chess really meant to him. His reply was: “Everything.”

Only one writer could have invented him: Franz Kafka. Spassky, on the other hand, could be the hero of any Stalin Prize-winning novelist . . . Poor Bobby? Poor Boris. One wonders who is more to be pitied; a state-owned gladiator or a freelance samurai.’ 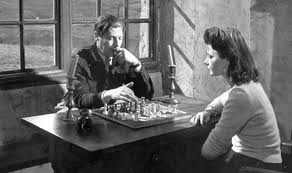 For all his insight, Koestler is sloppy on chess history. You can sense Edward Winter’s hackles rising as he writes about the ‘Frenchman’ Damiano, ‘world champion’ Morphy, ‘Taimonov’ and trots out hoary canards about ‘insane’ chess players, but he writes vividly on the beauty, violence and almost paranormal properties of the game:

‘ . . . chess is the perfect paradigm for both the glory and the bloodiness of the human mind. On the one hand, an exercise in pure imagination happily married to logic, staged as a ballet of symbolic figures on a mosaic of sixty-four squares; on the other hand, a gladiatorial contest. (p.196)

. . . each chessman, whether bishop, rook, knight or queen, embodies a dynamic threat, as if it were alive and animated by the desire to inflict maximum damage (by attack or defence) on the opponent’s men. When a chess-player looks at the board, he does not see a static mosaic, a “still-life”, but a magnetic field of forces, charged with energy – as Faraday saw the stresses surrounding magnets and currents as curves in space, or as Van Gogh saw vortices in the skies of Provence. Thus there is a strong element of animism and magic in the game.’ (p.200)

It’s a theme that Kasparov takes up in his purple preamble to Korchnoi–Kasparov (Lucerne 1982):

‘ . . . It can happen that the pieces as though receive an invisible impulse from the players, come alive, and begin to live their own lives. And when the energy invested by both sides reaches a critical point, the game begins to develop according to laws unknown to anyone, and it is no longer possible to control its course. The flood of concentrated chess thought washes away the usual contours of the board, and after twisting the pieces into violent pandemonium, it crashes down the depths of chess art.’

Koestler proudly declares himself a member of the fraternity of  ‘Passionate Duffers’. ‘We worship Caissa, the Muse of Chess, but owing to the inadequacy of our mental equipment can never hope to attain to her favours, condemned as we are to remain lifelong amateurs in the double meaning of that word: dilettantes and aficionados’ (p.195).

‘In the weeks to come we shall have the opportunity of watching two men facing each other in silence across the high-voltage board, where every move could make the fuses blow, each in a kind of waking trance, making the figures form a poetic dance which exists only in their mind’s eye, then mentally rearranging them in a different configuration, and yet another one, variation upon variation, while the ballet-master himself remains immobile and the kaleidoscopic changes of scenery all take place inside his skull.

While the game is on, it is only the choreography that matters – aggression is sublimated into dazzling acrobatics. There may be more unedifying episodes to come, but whatever happens, the fraternity of Passionate Duffers craves your indulgence for the magicians of the glorious and bloody game . . . ’  (p.202)