After years of trying, FIDE has finally succeeded in crafting a truly abysmal public image for itself. Its Vice President became embroiled in a fist-fight during the closing ceremony of one of its showcase events; the rules for the Candidates’ matches seem to change by the week; and players are forfeited if they fail to appear at the board on time. Meanwhile FIDE’s President has been implicated in money-laundering, murder, and plays chess with extraterrestrials (or was it Gadaffi?).

Now FIDE has scored another bullseye and the chess community is pretty excited about it. In fact the Dutch Chess Federation is so excited that it’s published an open letter of protest.

So what’s it all about? As Kevin Spraggett reports in his blog, FIDE is planning to introduce fees for internationally rated players. All Elo-strength competitors will have to pay an annual fee of  €30 towards the administration of ratings and tournament results. A lifetime FIDE licence will set them back €500.

And where’s the harm in that? It’s all for the good of the game. I’m quite taken with the scheme and would like to propose other ways to help FIDE fill its coffers.

1) Chess is threatened by ‘Remistod’ (‘death by draw’). To reduce the number of early truces, how about introducing a fee for draw offers? Let’s say €2 per offer and a €3.5 charge to each player if they actually shake hands. €4 for games drawn before move 12. The result: gripping, decisive chess and greater TV coverage. 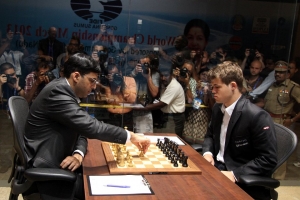 2) Boring openings would soon be a thing of the past if there were charges for playing them. Wouldn’t the world be a better place if there were fewer English Openings, for example? Other dull systems entailing a surcharge:

The Berlin Wall  Nobody would really miss this variation, would they? FIDE could count on Kasparov, for one, to support a charge.

The Slav  Not particularly boring but very hard to understand. Fewer Slavs, please. A €5 fee for 2…c6 would send a clear signal to players throughout the world.

that will be €5 please

3) Long games take up a lot of storage space in databases and are time-consuming for the dogsbodies who have to decipher the scoresheets. Just talk to the poor guy who had to input the 150 moves of Meier–Nakamura (Dortmund 2011).  FIDE could put an end to this drudgery by charging each player €5 for exceeding 80 moves.  The spectators have gone home anyway, so why not just stop the clocks?

Only time will tell whether these enterprising initiatives will come to pass. For the moment the national federations have resisted, but FIDE has staying power and the determination to impose its will, with bare knuckles if necessary.