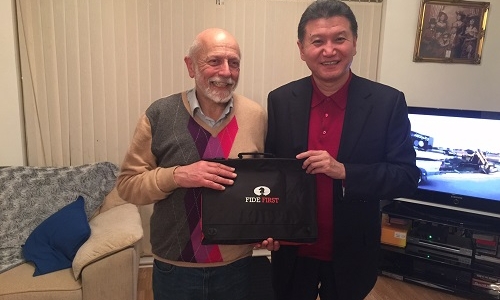 It was Hastings 1967-8 at the annual congress run by Frank Rhoden. I had not been doing particularly well after having bullied Frank into giving me a place in the tournament.

‘I’ve got to invite Keene, Hartston and Penrose, haven’t I?’ whined Frank, ‘and Whiteley hasn’t had a chance to win yet.’

‘So you don’t want a British player to win the Premier?’ I replied (referring to the results of the previous year). Frank invited me. Later, Penrose dropped out, so Whiteley got his chance after all.

One evening during the event, Florin Gheorghiu, the Romanian grandmaster, invited me to his room.

‘Michael, the Romanian government has told me that I must win an international tournament or they will put me in the army and I could get shot in battle.’

I was aghast at this prospect and agreed to throw my game to Gheorghiu to help him.

But I waived his suggestion aside. The game duly took place and around about move 12 I made a serious positional blunder which allowed Florin to win (the game was later published as a brilliancy). This was the famous ‘infamous’ Hastings, where all four grandmaster, Gheorghiu, Hort, Stein and Suetin, mysteriously finished top with 6 points each, thus splitting all the prize money. 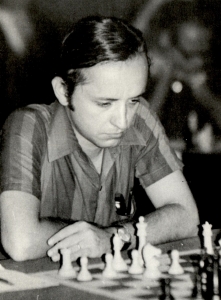 Florin Gheorghiu: ‘I could get shot in battle’ (© Jan Berglund)

Frank Rhodes was disgusted. Totally sloshed, he arrived at the scene of the last game, a miserable draw agreed in a tiny number of moves, and gave it a slow hand-clap.

‘Great game! Tremendous battle! Wonderful fight!’ he jeered, to the embarrassment of the spectators.

Several years later Gheorghiu was apprehended when he attempted to bribe Piasetski to throw a game to him. Piasetski not only defeated Gheorghiu but also lodged a complaint with the tournament organizers about the incident.

The years passed by and my behaviour was blameless, a model of gentlemanly conduct at the chessboard, except when I lost. But in 1980 temptation again came my way. It was at the Ramat Hasharon tournament in Israel.

After eight rounds I was ideally placed for my final International Master norm, which would have given me the title. Only three draws were needed from three games. But I had been in this situation before, at Hastings 1973-4, needing only three draws from Hartston, Suttles and Benko for a norm. Surely, I thought, everyone would be happy to give me a draw? But Hartston’s comments were unprintable, Suttles only agreed a draw because the position was, after all, drawn, and Benko ground me down in a long endgame, despite having drawn most of his games prior to this one. Chastened, I returned to the hotel with a sympathetic Tony Miles tagging along.

‘You’ll get your norm at the Nice Olympiad,’ said Jana Hartston.

But I did not go to Nice.

Now, in 1980, I was going to make no mistake. My opponents were to be Kraidman, Murei and Lipnowski, in that order. I had beaten Kraidman the previous year, and this year he had had a bad tournament. After seven moves I offered a draw. Kraidman thought for a while and then said ‘I have nothing to play for’ and agreed the draw. I knew it was pointless offering peace negotiations to a player like Murei, my next opponent. The game had to be slugged out. Choosing a sharp opening line I caused Murei to overreach in the attack, after which he was rather lucky to get a draw by perpetual check. 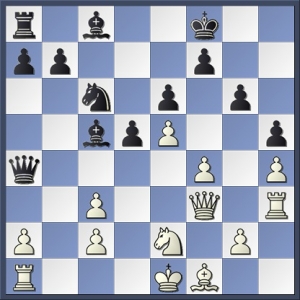 In this position Murei lurched into the attack by

and he was jolted by the sacrifice

Winning the exchange (which Black had already sacrificed as part of the opening variation). 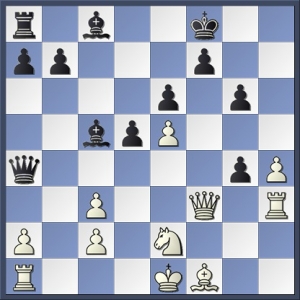 Undeterred by this setback, Murei resumed the offensive and was rewarded with a draw after 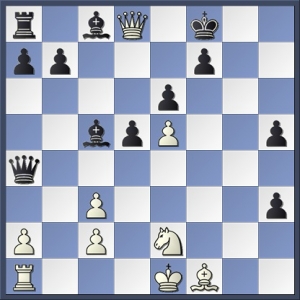 My last round opponent was Lipnowski of Canada. As we were the only two Commonwealth players in the event, we had become friends and often spent evenings analysing and talking together. I raised the subject of the draw I needed for the international title. Lipnowski was sympathetic.

‘I’d like you to get the title, you deserve it, but if I give you a draw it could cost me a third share of fifth prize.’

Eventually I agreed to pay him the Israeli equivalent of £30 out of my prize money to secure the draw.

‘It’s not a bribe,’ stated Irvin, ‘I rather consider it as compensation for lost earnings.’

The day dawned. Lipnowski was White, I replied with the Caro-Kann Defence. After about ten moves, just before the middlegame, I offered a draw. But Lipnowski did not reply. Was he about to double-cross me? Perhaps I had played the opening too quickly and he had a strong move here? I began to consider the consequences of his playing the pawn up to d5 . . . but at this point Lipnowski stretched out his hand and made me an IM.

At one of the weekend tournaments held in London, I was paired with Michael Franklin in the last round. Most of our games ended decisively, but this one, after a fluctuating struggle, looked destined to be drawn by perpetual check. Neither side could change the move order without incurring a certain loss, but a draw would put us on 4½ points, half a point below the prize list. At this point Franklin offered a draw.

‘I’d rather lose,’ I said, tacitly offering a deal.

Franklin made no answer, more moves were played and the inevitable draw agreed.

After the game Franklin explained:

‘I knew what you were suggesting, but if you start down the slippery slope you never know where it may end.’

At this point I saw the truth of Franklin’s remarks, fell at his feet and repented.

‘Is this all you have to confess, my son?’

‘Then go in peace and sin no more.’