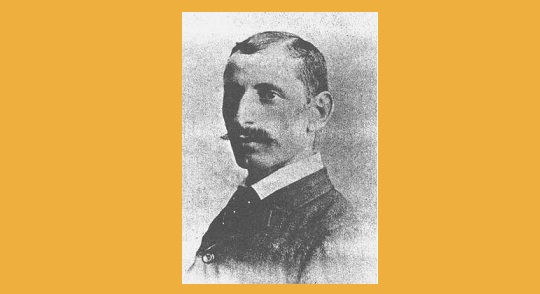 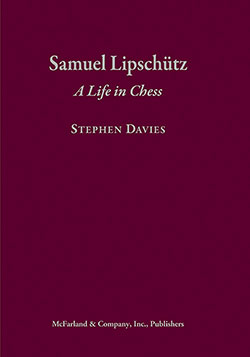 Samuel Lipschütz: A Life in Chess

It does not take much to fire a passion. In his introduction to Samuel Lipschütz: A Life in Chess, Stephen Davies relates how he became fascinated by Lipschütz’s name, which ultimately led him to write a biography on this nearly forgotten nineteenth-century master. The result is one of the finest chess biographies around.

This beautifully produced hardback is published by McFarland & Company, Inc., a household name to lovers of chess history (they have more than sixty of such works in their catalogue). Although McFarland’s output has focused on the ‘big names’, with biographies of players like Capablanca, Alekhine and Botvinnik, it has an impressive list of American subjects, some of whom, like Walter Penn Shipley and Julius Finn, are of national importance at best. Earlier reviews of Davies’ book give the impression that Lipschütz falls into the same category but in fact he surpasses them easily.1 In his introduction Davies rightly summarizes that

‘Lipschütz was the most prominent American chess master for only a short period, from the late 1880s to the mid-1890s, but he played a supporting role on the world stage of chess: he played against and was on friendly terms with two world champions, William Steinitz and Emanuel Lasker . . . He also played against five other men who contested matches for the official world championship . . . Further, Lipschütz was a prominent figure in the New York Chess scene for most of the 20 years after he joined the Manhattan Chess Club in 1883.’ [Davies, p.3]

Lipschütz’ forename has provoked debate over the years. Davies has already contributed to the discussion,2 and here he enumerates with characteristic precision how and where the various candidate names were used. All in all, it seems fair to opt for the anglicized ‘Samuel’ of the book’s title. Salomon/Solomon was probably the form used by Lipschütz’ countrymen and family.

Samuel Lipschütz was born in 1863 in Ungvár (nowadays Uzhhorod in Ukraine) in the Kingdom of Hungary, a part of the Austrian Empire. After his mother’s death he, his father and his brothers travelled to the United States one by one and settled in New York. Davies has unearthed several obscure details about this relatively poor migrant family to paint a broader picture of the society they lived in.3

Lipschütz learned the rules of chess when he was about 13, working in Hungary as a printer’s apprentice. These activities would define his life, for in the States he continued the same professional work while devoting his leisure hours to his favourite pastime.

The visits of Steinitz and Zukertort to the United States, in 1882 and 1883, boosted the game’s popularity, in much the same way Fischer did nearly a century later. It was the stimulus Lipschütz needed to join the Manhattan Chess Club at the end of 1883. It was the start of a meteoric career. He gained third prize in the sixth handicap tournament of the Manhattan Chess Club, where he received the odds of pawn and move from some of the strongest players in the country (notably Mackenzie and Delmar). In 1885 Lipschütz joined the New York Chess Club as well and became club champion.

In his earliest known games Lipschütz adopted a wild playing style, but quickly it becomes clear that he adhered to the modern chess school and was clearly influenced by Steinitz. The following game is a good example of his play at the time.

The cause of his problems. Lipschütz’ reaction is very powerful. 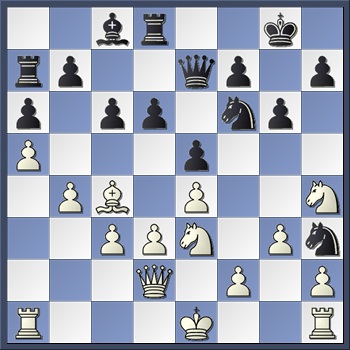 Lipschütz’ career really took off in 1886. With the support of the New York Chess Club, he went to London to play in the congress of the British Chess Association. After a slow start he beat George Henry Mackenzie, the strongest American master, and some of the world’s leading players. His play during this tournament was typical: positional, sometimes tactically flawed, but with a combativeness that makes his games still interesting to play over. Shortly after their return, Lipschütz and Mackenzie contested a small match at the Manhattan Chess Club. Lipschütz lost narrowly, but an examination of the games clearly shows that he deserved more. Davies found out that Mackenzie didn’t put his title of American Champion at stake.

In 1889, most of the world’s strongest players gathered for the Sixth American Chess Congress. Because Lipschütz had won their congress in February, the New York State Chess Association paid his entrance fee. He excelled himself. After a testing two months, during which at least 38 games had to be played (draws in the second cycle were replayed, and Lipschütz had five of them), he finished sixth. He was the best American player and the only American prize winner. I was most struck by a great move he played in his first-round game against Pollock. 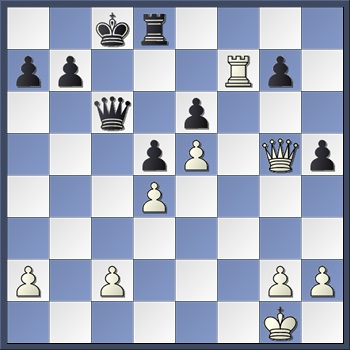 The position is level, but Black misjudges the situation.

There is nothing better.

Steinitz praised the next game as ‘an excellent specimen of modern style’. Today’s players will find it instructive. 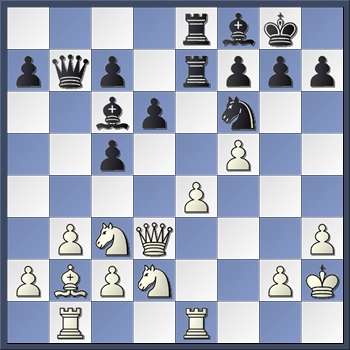 Lipschütz was not able to build on the high reputation he had gained in New York. He beat Eugene Delmar in a match that was generally considered to be of low quality, but in tournaments he was superseded by Jackson Whipps Showalter and Albert Beauregard Hodges. The following offhand blindfold game, played at Showalter’s house, shows his tactical side. 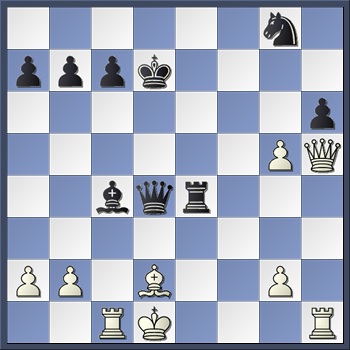 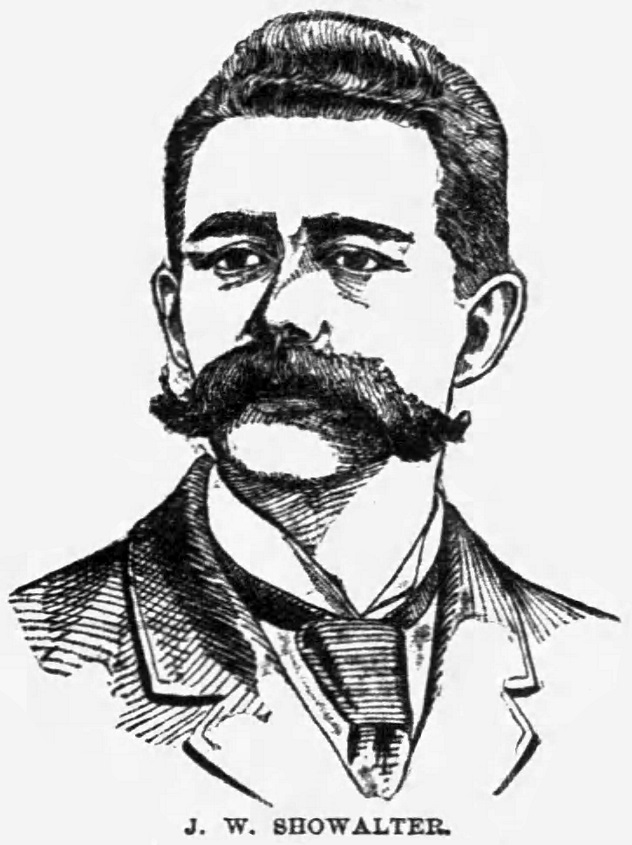 Showalter (courtesy of Kevin Marchese, who is writing his biography)

In April 1891, Captain Mackenzie died, leaving the American chess scene without a clear champion. In the months and years that followed, there were various tournaments, matches, negotiations and behind-the-scenes manoeuvres to find the new champion. Davies relates the story skilfully (he is one of the first to do this), offering us many details and background information. First Showalter claimed the title, by defeating Max Judd, but then Lipschütz took the lead, beating Showalter decisively (7-1). The quality of these games, and of Lipschütz’ games in subsequent years, was however rather poor. By this time his weakening health had prompted to move to the American West Coast where the climate was kinder. 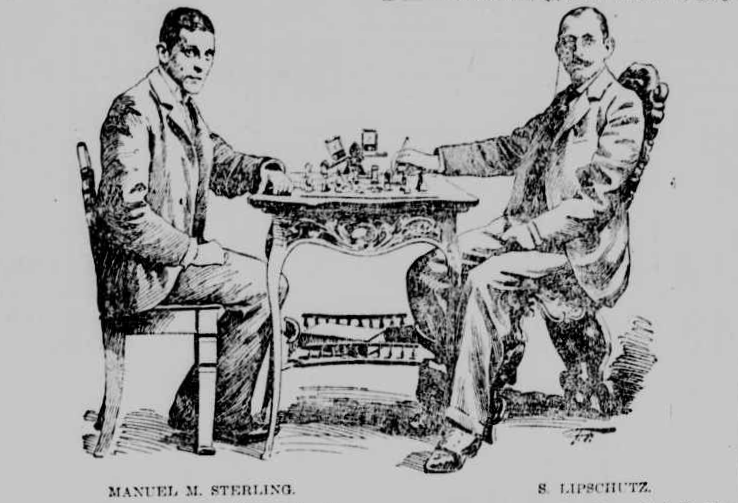 On his return to New York, in 1895, Lipschütz was beaten by Showalter in a rematch. For the rest of his short life he restricted his playing activity to New York. After years of poor form, Lipschütz regained his strength around the turn of the century, scoring some fine results in tournaments and twice beating Frank Marshall 3-0. In exhibition games he was able to put the world champion, Emanuel Lasker, to the test.

But then his health declined again. Lipschütz left for Hamburg where he underwent several operations, only to die at the untimely age of 42.

In his preface, Davies writes how he realized that he ‘was standing on the shoulders of my forebears in the field of late 19th century American chess history and I hope this account of Lipschütz’s life, milieu and chess career proves to be a worthy complement’ (Davies, p. 1), thereby acknowledging earlier biographies such as John Hilbert’s on Albert Hodges. Davies’ book is indeed a worthy one, and bears comparison with them. He more than succeeds in portraying Lipschutz’ life vividly. His narrative is sober and fascinating. He does not overburden it with detail (e.g. biographies of each and every opponent) and he avoids digressions that might add colour at the expense of readability. Yet Davies has an eye for the telling anecdote. There is the beautiful description of Steinitz (p.14) and the story of how the operator of the automaton Ajeeb was beaten, outsmoked, by a weak opponent (p.22).

Lipschütz spent almost his entire career in New York and its environs. Only twice did he meet the world’s elite, in London 1886 and New York 1889. Both of these chapters are wonderful, especially the latter. It is the best piece written on this massive tournament that I have seen and Davies succeeds in coming really close to his subject. Again he gathers information from a huge variety of sources to trace the origins of the tournament. He describes its course with several well-chosen, often sparkling sketches; yet he never loses sight of Lipschütz.

On a few occasions, however, Davies could have strengthened the book by interrupting its rigidly chronological flow. The first two congresses of the United States Chess Association, for example, appear somewhat randomly (on pages 85 and 148). Had they, and more background information been included in the seventh chapter, which deals with the third congress featuring Lipschütz, the reader would had had a more complete understanding of how they were run.

Davies could also have made more of the fascinating relationship between Lipschütz and Steinitz.

Hints and quotes pervade the book:

All this information is presented chronologically in a dispassionate way, without any attempt to knit the threads together.

The book is very accurate. There are no footnotes but almost every claim is supported by references to sources in the text itself. Davies provides tournament tables for the most important events in Lipschütz’ career, but a few minor ones are missing.

Davies presents the games with a mix of contemporary and modern notes. Lipschütz’ ascendancy coincided with Steinitz’ International Chess Magazine, and thus the reader will benefit from the large number of games annotated by Steinitz, who as an analyst was in a class of his own in the nineteenth century. Davies has checked the notes to each game for errors that  ‘mostly concern tactical possibilities’. He regularly offers insight into the ideas behind moves as well, an excellent practice that encourages the chess student to play through the games. At times, however, Davies’ notes are superfluous, notably when he discovers a superior alternative in a position that is already won. We were not  impressed by his excessive, and not always judicious, deployment of question marks. See, for example, game 69 where only Black is awarded question marks (three) even though he wins the game.

All in all, this is one of the best biographies of a nineteenth-century chess player I have read. Davies has written an excellently researched, readable book, filled with untold stories and related information.

It is one of the first books to examine the struggle for hegemony in American chess that took place after Mackenzie’s death in 1891, and Davies does it with great skill. The games vary in quality but are certainly not devoid of interest. Though largely unknown today, Lipschütz deserves such a tribute, given his status as American Champion and one of the strongest players of his day.

Hans Renette’s book, H.E. Bird: A Chess Biography with 1,198 Games will be published by McFarland in October.