Jose Raul Capablanca. Look at the that? What a magnificent way to start an article about chess.

Sometimes when the morning post has depressed me with various companies demanding money, I write ‘Jose Raul Capablanca’ on their bills and somehow they feel less threatening. They go away. (Before I discovered Jose Raul Capablanca, I use to put bills in a shredder and use the shreds to line my cat’s litter tray. They send the bill, I ignore it, shred it and the cat pisses on it.)

I was going to work the other day and the No.22 bus broke down. Those of you who do not have the pleasure of working in Edinburgh will not realise the importance of the No.22 bus. It carries weary bleary banking people to The Gyle complex, a square financial mile of corporate buildings all containing bods whose job is to count other people’s money.

A very important bus the No.22.
I hastily wrote ‘Jose Raul Capablanca’ on the back of a bus ticket and tucked it under the smoking bonnet.
Vroooom!
Passengers still talk of the day the No.22 glided through the sticky Edinburgh traffic in the smoothest ride of their lives.

Once, in an inspired moment, I wrote ‘Jose Raul Capablanca’ on my chest in blue felt tip pen and went to bed. I slept the sleep of Adonis. Not only did I awake fully refreshed, but I was clean shaven and dressed in a smart, though not fashionable, shirt and tie, shoes polished and gleaming.

Do not, and I must stress this, do not write ‘Tal’ on a piece of paper and slide it under the bonnet of your bus. I did this once and it was the most hair-raising journey of my life.
The bus played chicken with ten ton trucks, forced cars off the road and every 2 miles it ejected passengers out of the emergency exit.

Of course I jest (I made up that bit about passengers getting ejected).

But is it not funny how sometimes the mere mention of a name can pre-determine your thoughts prior to playing over a game. If I play over a Petrosian game where he plays 1.d4. I get a different feeling of what’s about to happen from when I play 1.d4 in say, a Frank Marshall game. Strange but true.

I pick one at random and play over a game or two. I try to do this as often as possible. Not because I have too. It’s because I really do enjoy it. I look forward to it.

Since I’ve started doing Chandler Cornered (gosh – I’ve just checked, it’s been 4 years now http://chessedinburgh.co.uk/chandler.php), I’ve have been sent hundreds of games by players graded under 2000. These I really love playing over. One simply does not know what is coming next. Kings rarely castle, players fall into and out of opening traps, pieces are won or lost on the flip of a coin.

Note this example. White’s king decides he is fed up sitting around so he strolls up the board to be mated. 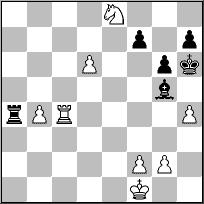 My site is littered with such games.

Once I had to make one up. Read on.

At the 2005 Edinburgh Congress I was told that Robert Burns, a Sandy Bells drinking partner of mine, had played a game that started with the king and queen on the wrong squares. Now Robert’s grade at the time was 999. I recall his joy when in the first round he played a junior whose grade was 998.

Robert has never quite mastered the art of keeping a correct score sheet so I assumed that I would never see the game. All I knew was that Robert had won. So I made up a plausible short game with the black king and queen on the wrong square and put it on Chandler Cornered.

Now remember to swap over the black king and queen. 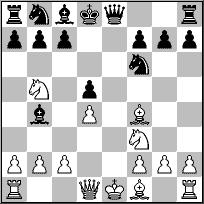 So I had to do a quick apology and published the real game. 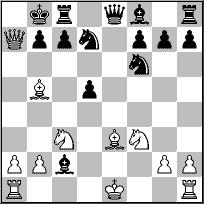 I need names, date and place, no internet games. Cheers.

Right I’m off to Sandy Bells to get drunk. Though I suppose I could just write ‘Alexander Alekhine’ on a piece of paper, stick it in my pocket and stay home.