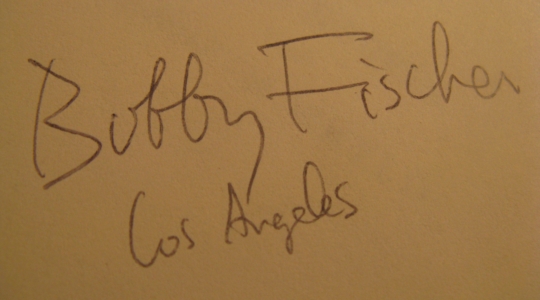 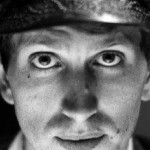 Your magazine sure is great (not as great as me – I’m the greatest), way better than all those other lying chess rags whose editors have banded together to make me out to be some kinda villain! Those guys are out to get me and you can bet your bottom dollar they’re in cahoots with the CIA and the FBI as well. Ever since I kicked my dear, beloved late Mother out of my house I’ve had a bad press. The editors of Chess Monthly, BCM, Inside Chess, New in Chess, USA Today, Palo Alto Weekly, The Financial Times and Moscow News pre-arrange their articles so that they’re all printing the same stuff about me and people believe it. In Kingpin you don’t write anything about me, and that’s how I like it.

In the pool the other day I was thinking, maybe I’m not getting my point of view across. Chess fans deserve the truth. The world champion’s gotta tell them it straight, otherwise who else will, right? So I decided that from now on Kingpin can publish what I write about myself, exclusively, on one condition:

1) For a start, I get the best pages in the magazine, and I mean the best. No second-rate pages. I don’t want the last page, or the pages with the staples in them – I hate staples – or any page within three pages of Gary Lane. And I don’t want any spelling errrs on the pages with me on it, or any corrections to what I write. What I write’s what I write, and it’s great, because I’m the greatest. I can’t stand corrections. My book was ruined by corrections. That can’t happen again, see? Otherwise that’s it. I don’t write. I don’t care about the money, I’ll give the payment to Iljumzhinov, for the good of chess, because he’s a guy who knows what’s what. That’s if I don’t write. If I don’t write, you still pay, and I’ll give the money to Iljumzhinov. Yeah. But if I do write, then I do want the money. That’s fair. And the money had better be good. Don’t try to rip me off with the sorta rates you give to ordinary grandmasters. You give me five times as much as your other writers, because I’m the world champion. I can’t use US dollars out here, so I want it in Hungarian forints. Clean notes. No checks. And another thing. About the size of my name. I’m a bigger name than anyone else, so my name should look bigger. Say, 15 points. At least 15 points. No, make it 16. Minimum. In capitals, Times New Roman. No showy fonts, like Bookman Old Style or PosterBodoni. I’m a straightforward fellow, and I want people to know that. And I wanna be on my own on the page, right? No one else gets onto my pages, you hear? No ads, no other articles spilling over onto my pages.

That’s the only condition. See, everyone says I drive a hard bargain, but I’m gonna change my image. I’m on the side of the good guys, always have been. I was communicating with the Lord this morning and He agreed with me. You can’t get a bigger backer than the boss himself, you know? God said I was right to quit chess when I did. Top chess players deserve respect, and they shouldn’t have to play chess to get it. Deep Blue understands what I’m talking about. That’s one smart computer, retiring when it’s winning, after it’s beaten the so-called world champion, if you can call any cheating Russian a world champion. So I’d like to congratulate Deep Blue on its correct decision, just like I congratulated Korchnoi when he moved outta the Soviet Union. He had sense. I wouldn’t say he was really a Russian at all, but some kinda misfit like me who had to get away from his dirty country.

The U.S. government’s been on my tail for as long as I can remember. They tortured me in a Pasadena jailhouse, but they didn’t get my brain, like they were hoping to. They wanted to get into my mind and take out everything I know about chess, to sell my secrets to the Russians, but it didn’t work! I just thought about random chess, so when they were reading my mind they thought they’d got my openings, but it was all messed up! Clever, huh? That’s a trick that only a genius could come up with, right? I just feel sorry for ordinary Americans who are having their brains sifted by the government and can’t do anything about it. You’ve gotta be on your guard for that type of thing.

When I made it to Europe I thought I’d be safe, but they came after me. Even to Yugoslavia, where I was playing the second-greatest chess match in the history of the world, with my old fr-, I mean hated, detested, Soviet enemy, Boris Spassky. Just to disturb my concentration, right when I really needed to think hard about how to deal with this tough, tough opponent, the U.S. government sent me a letter. They said I was busting their sanctions and that I was in trouble. I guess they got mad when they saw all that random chess I’d given them and wanted another shot at me. I spat on the letter. What else could I do? That really influenced people. Only a coupla months ago, the Austrian captain in a match against Slough ripped up a complaint, right in the face of Tony Miles who wrote it. That was my influence, you can bet. That’s how I’ve changed chess.

In the name of God