A Bad End to the Year

Olimpiu G. Urcan offers the following tragic-comic true story from the Cleveland Plain Dealer of December 30, 1910 (page 11). It’s not clear who won the game but we hope it was Carman. 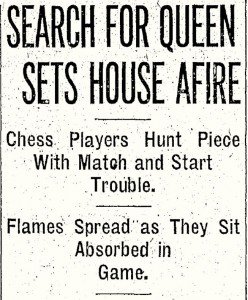 G.B. Carman and his brother-in-law, Arthur Gradolph, living at 1343 E. 112th-st., are chess players.To that can be blamed a fire in the dining room of the Carman home last evening. To that fact also can be blamed the good start which the fire got before it was discovered by Carman, who was severely burned in the attempt to extinguish it.

Carman’s wife and child are away on a visit and to pass the time the two men have been spending the evenings playing chess. Last night when they set up the pieces for the first game they found that the queen was missing.

Carman searched for it with a lighted match under a sofa.

Both men were later on deeply absorbed in the game when the smoke began to come in little wisps from under the sofa.

They were still absorbed when the smoke poured in great clouds from the sofa and flames began reaching out toward the wall, and not until one of the men had called “checkmate,” and the game was ended did either of them notice that the house was full of smoke.

While Gradolph ran to the street to turn in the alarm Carman seized the flaming sofa and started out of the house with it.

The front porch was covered with snow and Carman slipped, falling down with the sofa on top of him. Before he could throw the blazing article of furniture from him he was severely burned about the arms, hands and chest.

He was assisted to the office of Dr. B.B. Colvin, while the firemen extinguished the flames which had spread to the curtains and carpets in the house. The loss was not great.