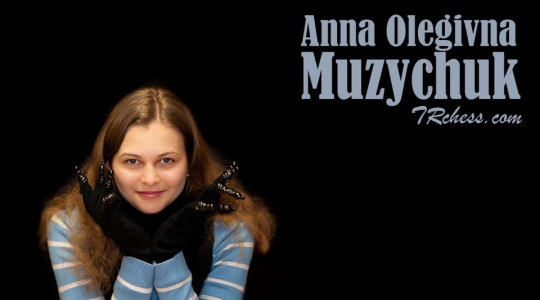 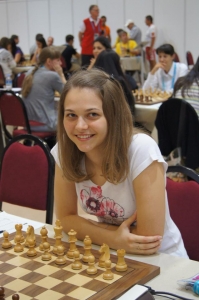 Anna Muzychuk was awarded the Grandmaster title in 2012 and is ranked 4th among the world’s best women players. Born in Lvov on 28 February 1990, she has represented Slovenia in team competitions since 2004. Her younger sister Mariya  is an International Master.

When I was 5 years old and started to participate in my first tournaments. To my surprise I even remember many episodes from the games I played at that time.

The first that comes to my mind is the game against Sasikiran where I managed to win with the black pieces.

Well, there are some games which I lost just because of some stupid blunders, so this is what I would like to avoid.

I like spending time with my friends and sister, listening to music, playing games, watching TV or simply walking around.

The moments when something I really want a lot happens.

I would prefer to keep this secret.

My style is still changing but at the moment I think I play well in the endgames.

Being depressed from time to time.

The name of my sister.

I am not sure I will need a book on the desert island.

I think now it is more positional.

I am quite lucky not to have a big minus score against any player.

Maybe this will sound strange but it is the game Muzychuk-Harika from the 2001 World Youth Championship. I was just 11 years old and found a strong novelty over the board on the 23rd move. I was very proud that after that game some top GMs told me that it was a great improvement for White in this line.

My game with Korchnoi. It was a dead drawn position and I offered a draw at some moment but my opponent continued playing and later on lost on time. After the game Korchnoi claimed that he did not hear the draw offer. We suggested that the organizers count the game as a draw as in the final position there were no winning chances for either side, but because it was a team competition the captains agreed it should be scored as a win for me. I felt really sorry about this situation.

Dvoretsky’s books. In my opinion he explains many things well and you can always find something interesting in his books whatever your level.

I think the chess community could improve the status of chess in several areas: make chess an Olympic sport; stabilise the tournament calendar; establish one system for the world championship cycle; fix the time controls for classical, rapid and blitz events and the general rules connected with them.

I prefer to live in the present.

I would like to have a good opinion of other people, especially if they are chess players.

When I was a child I had one favourite tournament organized in my region and every year I looked forward to it. Now I don’t play in this tournament but generally I like participating in the top-level events.

What keeps you awake at night?

Not really. I like many sports, both watching and playing, but I never had time to take any of them seriously. Still, I hope this will change.