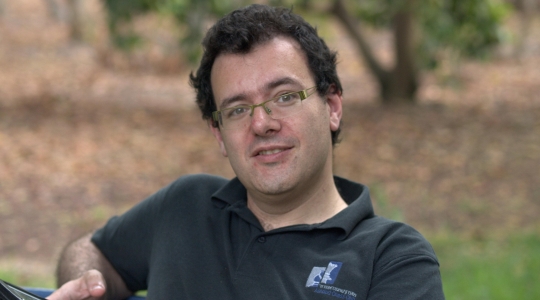 Emil is one of the most inventive and flamboyant players in the world. Renowned for his romantic playing style and brilliant sacrificial attacks, he will be describing some of his best games exclusively for Kingpin.

Emil was born in Baku on 19 September 1977. He won the World Junior Chess Championship in 1996 and has represented Israel in eight Olympiads. At the 39th Olympiad in Khanty-Mansiysk in 2010 he achieved the highest tournament performance rating (2895) in the history of the event. He took the European Championship in 2001 and has won over 40 tournaments, notably the Aeroflot Open (2005). He is president of the Association of Chess Professionals and lives in Israel.

This game was played in the first round and due to the peculiarities of local hospitality I didn’t manage to prepare properly for it. Indeed, most of the players arrived in Poikovsky on the night before round one after a marathon journey. Poikovsky is a little town (or rather big village) in Western Siberia, so most of us had to fly to Moscow and take a three-hour connecting flight to Surgut followed by another two hours in a ‘chess’ bus. Instead of being allowed to rest after our long expedition we were taken to a banquet thrown by the region’s Governor and local sponsors. The atmosphere was very friendly, the meal delicious and the vodka was . . . well, I don’t know the correct adjective for a good vodka but it was excellent, even if the players couldn’t risk more than a shot or two. Unfortunately all this hardly helped my preparation, and the pairings weren’t announced until close to midnight. On the day of the game I intended to prepare for Shirov’s most likely openings but didn’t have enough time as I and GM Jakovenko had to represent the players at the official press conference.

As we shall see, I decided to repeat my home analysis, but . . .

GM Shirov has commented on this game  for several magazines. I am in a stronger position than he was when he did this because I write with the benefit of having seen his notes.

One of his favourite moves. Of course, I had to be ready for 1…c5 as well.

This move became popular after the Negi–Lahno match. It started to attract the attention of top players after White got an edge in a couple of the games. Later on Shirov improved on Black’s play and easily held against Adams. I also analysed it a lot and found a strong idea. Unfortunately the lines are so complex that I just couldn’t remember everything at the board. 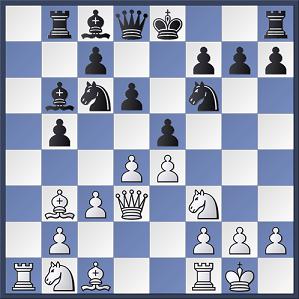 I believe this is a novelty. White continues to develop, ignoring Black’s threats. Previously I had tried 16 Nbd2 against Avrukh but got no advantage. 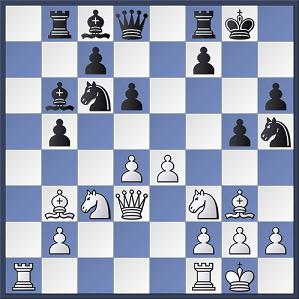 This logical move is a mistake. Another optimistic way to play is 16…g4 but it also fails after 17 e5!. Black probably has to look at more modest ways to hold the position.

‘. . . most attacks can be parried or refuted and we evaluate such complications much more accurately than the top Grandmasters of 30–50 years ago. Isn’t that why there have been fewer and fewer remarkable games in recent years?’

Quite a natural recapture. I can be proud of the fact that according to Shirov three strong Grandmasters (Shirov, Nisipeanu and Ganguly) missed my idea while preparing for an important match. I don’t really see anything extraordinary about it. The vitally important f-file is opened and White’s attack becomes very strong. Even if Fritz/Rybka totally dismissed 17 fxg3 I would check it. 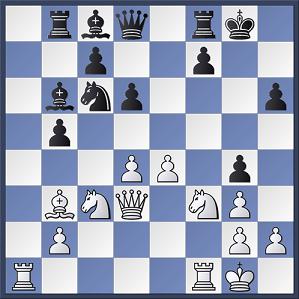 Black’s play is very consequent. Shirov claims this move is bad and proposes 17…Ne5 instead. I’d  thoroughly analysed 17…Ne5 and proved that life is not rosy for Black here either (if only I could remember my analysis!). However, 17…g4 is by no means losing, as we shall see.

Shirov gives this move an exclamation mark but actually it’s the only move. 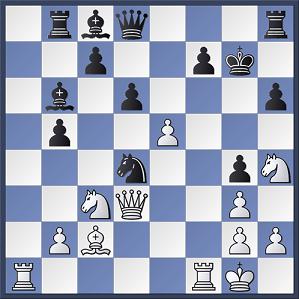 ‘Can you think of a recent game featuring a great sacrificial attack? Kasparov–Topalov, 1999? That was years ago.’

Shirov awards this a question mark. I don’t think the situation is so black and white and would rather punctuate it !??. Tal’s sacrifices were effective partly because in his day defence technique was far worse than it is now. Today we all know that most sacrifices do not work. People are no longer afraid to walk their king into the centre of the board and to expose him to discovered check. After thousands of hours spent analysing with mighty computer engines, we know that most attacks can be parried or refuted and we evaluate such complications much more accurately than the top Grandmasters of 30–50 years ago. Isn’t that why there have been fewer and fewer remarkable games in recent years? Can you think of a recent game featuring a great sacrificial attack? Kasparov–Topalov, 1999? That was years ago. Dozens of thousands (literally!) of games have been played by the top players since then.

Although Vishy Anand praised my beautiful combination against Gormally (see Kingpin 41), Fritz, Rybka and other animals have shown the refutation.  But does it make the combination less beautiful? I don’t know the answer. Professor Elo probably did, for he rightly stressed that a player’s ranking reflects the number of points scored rather than the number of beautiful games played. Objectively 21 Kh1 was much stronger, and remarkably I had looked at it in my analysis. Well, such a quiet move is easy to forget. However, it is not winning. Shirov was probably too disgusted with his position or didn’t want to analyse it seriously, but whatever the reason his verdict that ‘Black is hopeless’ is a bit too strong. 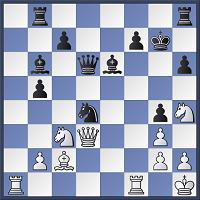 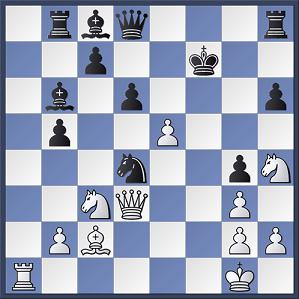 22…Nf3+ 23 Kh1 would be just winning for White of course. The computer suggests 22…Ke6 but it looks wrong – though ‘looks wrong’ is not sufficient reason to dismiss the move. After 23 Kh1 White’s attack is very dangerous but there’s little sense in copy and pasting computer lines here.

‘I was surprised to hear Shirov accusing me of unethical behaviour. He thought it was rude of me to offer a draw since he had avoided repeating moves on move 31.’ 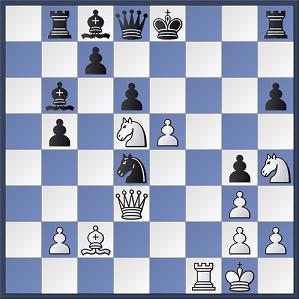 Natural but not the best. Once again the computer lines suggested by Alexei in his analysis are correct – but they are COMPUTER lines. Snatching the dangerous pawn on e5 with the knight is just a natural and human way to play and has nothing to do with a ‘patzer see a doublecheck. . . I am sure Shirov wouldn’t have played 23…Nf3+ unless he had 24…Nxe5 to follow! The most human winning line is 23…Nxc2+ 24 Kh1 Ne3 25 Nf6+ 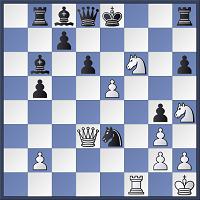 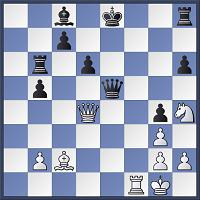 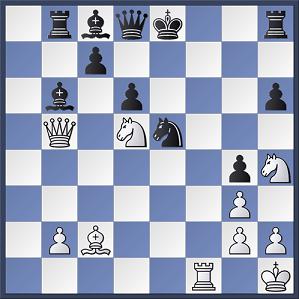 White has serious threats but unfortunately Black’s only defence is more than sufficient. 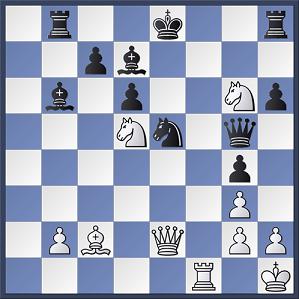 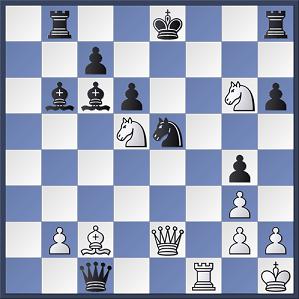 Black avoids from the threefold repetition, the position remains equal and is almost a forced draw. 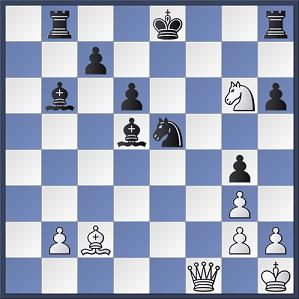 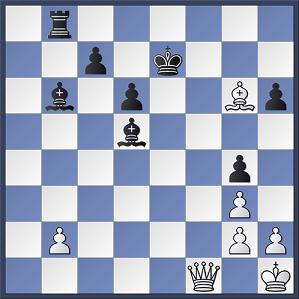 Here I offered a draw as the line played in the game is pretty obvious, so I was surprised to hear Shirov accusing me of unethical behaviour. He thought it was  rude of me to offer a draw since he had avoided repeating moves on move 31. I see nothing wrong here as the perpetual is inevitable in a couple of moves. It’s not as if I had made a second draw offer or proposed a draw in a worse position. Anyway, the remaining moves just confirm my evaluation.

‘Excellent defensive move’ according to my opponent, but there was nothing wrong in 36 Qd3 leading to more or less the same drawish lines. 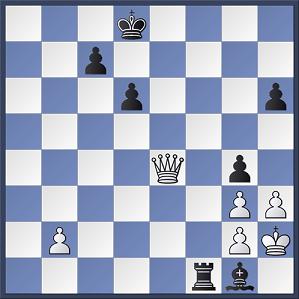 A highly entertaining game. We both made mistakes but it was a real battle and I hope you enjoyed it. It won’t get into either of our best game collections but it’s a candidate for my memorable games shortlist. Romantic chess is alive and kicking, and I look forward to showing you more examples! ½–½