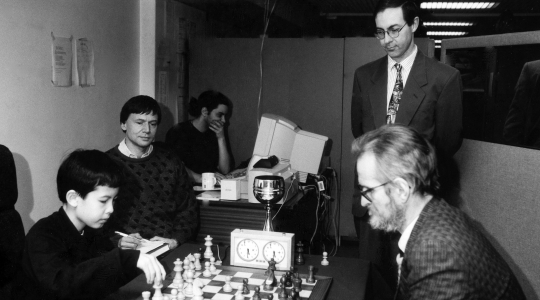 Following my recent interview for Kingpin, conducted by Sarah Hurst, the editor has asked me to provide some documentary evidence that once upon a time I really did play chess and not just talk about it. Well, it’s been quite a while since I engaged in over-the-board combat, so readers will have to put up with some old-fashioned chess from the pre-computer era and decide for themselves whether or not these games of mine have already passed their sell-by date.

The first such encounter I want to show you was played in Holland’s world famous chess festival, which is nowadays held every year in Wijk aan Zee. Here, grandmasters and amateurs play side by side in their respective tournaments in a friendly yet competitive atmosphere. 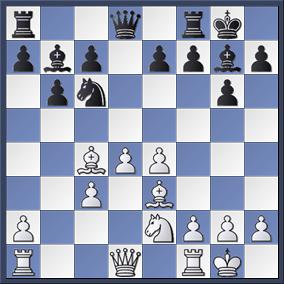 Though Bent Larsen had lost to Boris Spassky in the grandmaster tournament with this development of pieces, I thought it had a lot of potential and so decided to try it out myself.

If I remember correctly, my opponent had stood in as a late replacement when one of the original entrants had pulled out of our all-play-all section of ten players. So I had no idea of his playing strength. One thing was clear, however – he was moving quickly and wasting no time in coming after my king.

When I was on a trip to Holland in 1979, I took the opportunity to visit another traditional tournament, held in Tilburg in the south of the country. There I was amused to see that a game between Spassky and Hubner had reached the same position as this – over ten years later! Hubner continued instead with 15…Be4, but lost after 16.Bg5. However, why exchange such a fine bishop which bears down on White’s vulnerable g2 square? 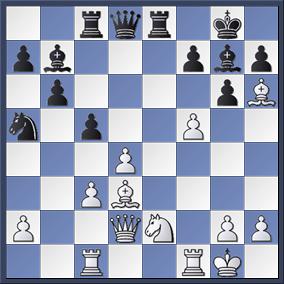 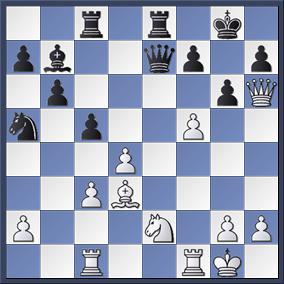 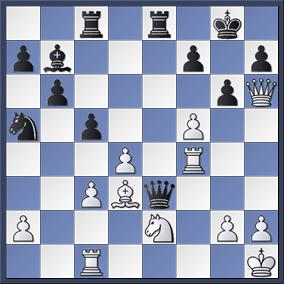 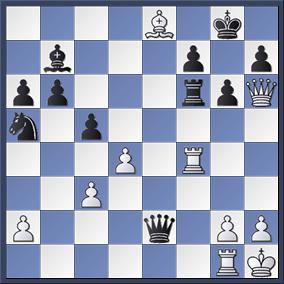 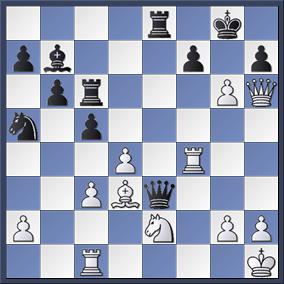 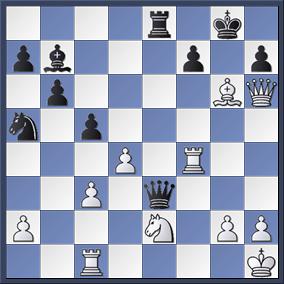 More shock tactics. White now sees that 23.Nxc1 Re1+ mates. The whole idea of my last two moves was to divert White’s bishop from its defence of the f1 square, thereby preventing an interposition on f1, stopping the back rank mate. Luring that bishop to c6 or g6 amounts to the same thing!

Black is now a piece ahead, so simplification is the quickest way to victory.

If I had won my last round game I would have also won the tournament – but I lost. I shall never forget the opening moves of that game. In reply to 1 e4, my opponent played 1…d6, then, after 2 d4, surprised me with 2…f5, turning my customary king’s pawn opening into a queen’s pawn Dutch(!) Defence. I was already half-beaten after only two moves. Nevertheless I did still receive a prize, the very first number of Chess Informator, which, after all these years continues to flourish – just like the splendid Wijk aan Zee tournament itself.

The second game that I’d like to show you was even featured as ‘Game of the Day’, a few years ago on chessgames.com – a fine website packed full of games, data and comments from readers. However, they did make one slight mistake … they attributed the game not to me, but to my grandmaster namesake, Michael Adams!! 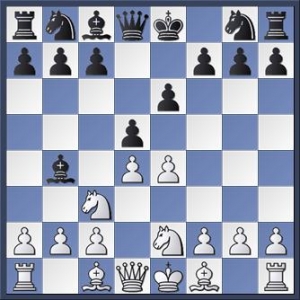 This bears some resemblance to the Fort Knox variation, where White’s knight is better placed on f3. Black intends to play 7…dxe4 8 Qxe4 Bc6, gaining time with an attack on the queen, so I continued…

Challenging the centre, but at the cost of weakening his kingside.

Halting any further advance of Black’s f-pawn, and securing control of the e5 and g5 squares. 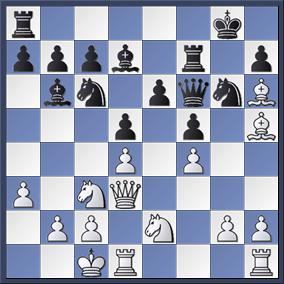 Making way for the advance of the h-pawn.

This was an easy choice for me as I always used to develop my rooks this way when I was a beginner! 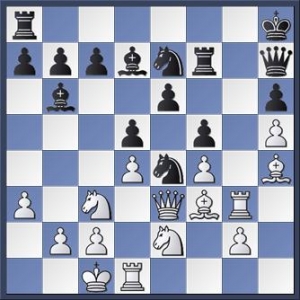 But now the time has come for the breakthrough.

A study of Chigorin’s games had convinced me that knights were superior to bishops! 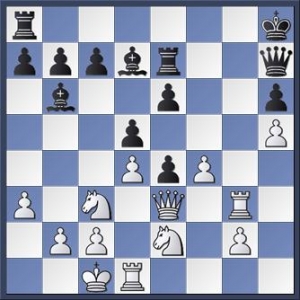 Cutting off the queen’s diagonal line of retreat as well as hitting the h6 pawn.

Neatly exploiting the pin on White’s d-pawn, but the queen will soon be a liability on this square. 29…Qf8 30.Rf1 would have allowed White to bring his rook into the attack with gain of time.

Vacating the c3 square whilst providing new opportunities for the knight on the kingside. 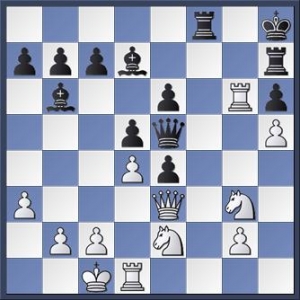 Though the queen is placed right in the middle of the board, she has only one safe move – and even this is not so safe!

The opening up of the game has exposed many weak squares in Black’s camp. 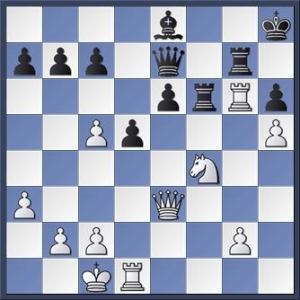 This position, presumably taken from chessgames.com, has subsequently been posted on other websites too – as a puzzle. ‘Can you find the winning move that Michael Adams played here?’ they ask.

The rest is easy.

The publication of this game led to some correspondence. On 12 February 2008 there were two postings on chessgames.com. One from nmchessknight stated: “Excellent play by Adams” and the other from kackhander: “As I slowly improve I appreciate Adams’ style more and more: no thundering tactical shots, just steady improvement and building of pressure and complications. This game seems to encapsulate his style pretty well.” Thank you, gentlemen, I am in full agreement with your views.

Then, on 27 April 2008, there suddenly came a reaction from Ray Keene: “This game is suspicious – Michael Adams would have been just nine years old in 1981 – I think this game was by Jimmy Adams the well known chess writer and editor – who works for Chess magazine – needs checking anyway!!” However… though I am indeed grateful to Raymondo for referring the matter to chessgames.com, he seems to have forgotten that it was I myself who pointed out this error to him in the first place!! I guess I didn’t sound too convincing…

This was followed on 16 May 2008 by a further posting from LutherBlisset: “I have checked with Jimmy Adams, the editor of Chess magazine in the UK. It was played by him. Not Michael Adams. It is a very good game.”

Never in my life have I received such praise and, indeed, I would have thought these words would have settled the matter once and for all. However, this was not the case and no correction was made by chessgames.com. Clearly they were still not satisfied and needed further proof.

Finally, on 20 August 2010, Inman made one last observation: “It’s interesting that the two Adams (definitely not related) have such similar styles. Interesting, too, that after two years the database has not been corrected…”

Yes, it is interesting. So interesting in fact that I have asked if I may use the platform of the brand new website of Kingpin, a journal noted for its honesty and integrity, as well as its intolerance of unwarranted gossip, unsubstantiated claims and outright falsehoods, to provide hard evidence that it was I, James Adams, who played this game. And what is this hard evidence? Why, the original scoresheet, of course! This provides information not found elsewhere, i.e. that this game was played on 12 March 1981, in a match between Metropolitan (my club!) and Cavendish. 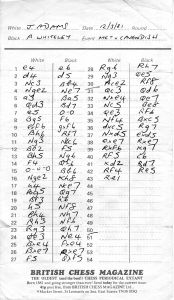 But one question remains. How did this amateur game, played in a club room in London, ever reach the public domain? Allow me to provide the answer.

Over 25 years ago, prolific chess publisher Tony Gillam, of Nottingham, casually mentioned to me that he was bringing out a book dedicated exclusively to the French Winawer Alekhine Gambit (1 e4 e6 2 d4 d5 3 Nc3 Bb4 4 Nge2) and in turn I casually mentioned to him that I had played the selfsame opening variation against Andrew Whiteley, an England international, and I would be pleased to send him the score. I kept my promise, he kept his, and the book duly appeared in 1986 with my ‘Adams-type’ game featured on pages 81-82. Moreover, I was correctly identified as J.Adams, since, as it happens, the author, Tony Dempsey, was renowned for his meticulous attention to detail.

So that’s it. I have put the record straight. But will chessgames.com give me my game back? Moreover, whilst they are dealing with this, will they also remove my name from another game which, conversely, they say I played, but in fact didn’t, against grandmaster Yakob Murey? Perhaps I wouldn’t have minded if I had won that game, but apparently I lost it.

So, Kingpin readers, beware of errors on the internet. Something like this could happen to you… 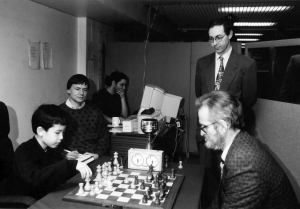 Andrew Whiteley playing a challenge match against 9 year old David Howell in the year 2000. I am in the picture too as I was scoring the game. Looking on is Barry Gale, organiser of the Kensington tournaments at the time, and Alexis Harakis is at the computer analysing the game on Fritz. © Mark Huba

But now it is time to draw the topic to a close: “Too many facts and figures…” I already hear you complaining – “Who does he think he is, Edward Winter?”

All of which, quite naturally, brings to mind the subject of chess history, and it is with this that I wish to conclude. About a year ago I attended a special ceremony to re-dedicate the newly restored grave of the nineteenth-century world title challenger, Johannes Zukertort, in Brompton Cemetery, West London. This was a marvellous initiative driven by grandmaster Stuart Conquest and with generous support from Polish clergy and embassy officials. And at this well-attended gathering, I happened to meet my erstwhile opponent, Andrew Whiteley, who enjoyed informing me of his ‘genealogical line’ leading straight back to the great man himself! You see, he had played chess against Leonard Barden, who had played against the German grandmaster Jacques Mieses, who had played Zukertort in the 1800s – three generations and a span of one hundred and twenty five years! There and then I asked myself, should this now be entered in the Guinness Book of Records – or perhaps even on ancestry.com ?