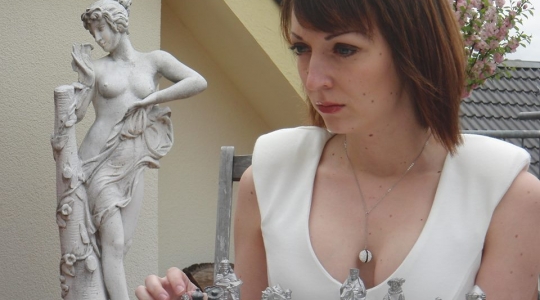 Elisabeth Paehtz (pronounced ‘pates’) was born on 8 January 1985. She learnt chess from her father Thomas, himself a Grandmaster, and became the youngest ever German women’s chess champion in 1999. Three years later she won the World Youth Championship (U-18) and became World Junior Champion (U-20) in 2005, gaining the IM title.  She remains Germany’s strongest female player.

My earliest memory I guess was my first victory at the age of 6 in some open tournament. It was my very first win ever, all remaining games I lost though.

It was my great tactical victory at the age of 14 in the World Under 18 Youth Championship with Black against Morkurnaite.

That’s usually something I tend to forget as quickly as possible, however I bet I lost many awful games.

I am a big fan of Carlsen, as he’s given chess a new spirit by showing that that not every game must have 25 moves of theory prepared at home! 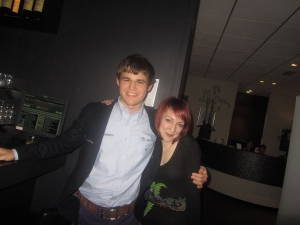 My favourite singer is Luciano Pavarotti. In general I prefer classical music and I regret not doing more with my interest in it because, like my chess friend and great bass baritone Emil Sutovsky, I had some talent…

I would say my greatest weakness is my mental side. If something disturbing happens during a tournament – it could be fights, conflicts or disagreements about playing conditions – it affects my chess badly. Then I can’t get it out of my mind and the tournament usually ends in a disaster.

My greatest strength chesswise is that I have a good intuition.

Well, I am not a big reader in general but I enjoyed the books of Tommy Jaud.

I always thought of myself as a tactical player but my latest games are either positional victories or losses because of tactical blunders ☺.

I have the worst results against A. Stefanova, but this does not apply to rapid and blitz.

I would study opera singing while playing chess.

The biggest disappointment is the way my chess federation supports women’s chess in Germany – no support at all, not even for talented girls in early age groups. 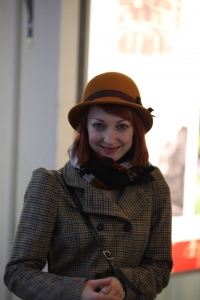 My friends say I look happiest when I’m singing, and I guess that’s sort of true.

I am satisfied with my appearance, but could be 5 cm taller ☺. I am 1.60m (5ft 3in) and therefore below average by German standards.

The most embarrassing moment was in 2002 during the Las Vegas Open. I had to leave the board crying tears of laughter as my neighbour acted very weird in time trouble. Embarrassing because I should have controlled myself. Obviously my neighbour could not do anything to control his nervousness.

In my childhood I studied the book series by Yusupov and Dvoretsky and nowadays I use their books to teach others. I’ve met Yusupov and I admire him not only as a great coach but also because of his great personality.

Probably to abandon all engines and chess software and play chess like in former times, when real strength and understanding counted and not who did the most precise home preparation with the help of engines. These engines are even more destructive nowadays as the problem of cheating has increased drastically. In Germany there have been two recent cases involving rather young players and that’s quite sad.

Gibraltar Chess Masters: nice atmosphere, brilliant tournament and even more brilliant prizes for women… the only open tournament where a woman chessplayer feels accepted as an equal ☺.

I think I would like to have lived during times of the French Revolution, but just because women dressed in a much more feminine way than nowadays ☺.

I don’t remember facing anyone especially irritating. Once an opponent dared to have a look under the table before over the board… This we may probably call a little bit irritating.

I am sure I have played many courteous people but no one extraordinary that way. If I could give a prize to the most courteous person in the chess world, I would give it to David Navara. He greets everyone, usually in their own language, which is not only very respectful but sweet and charming too. I think most super grandmasters at his level wouldn’t even bother to ask lower ranked players how they are or how they played. David is exceptional that way.

I like running and enjoy working out in gyms, but nothing at a competitive level.

I love watching Little House on the Prairie. It is a world full of harmony and love, probably a very good way for me to relax. 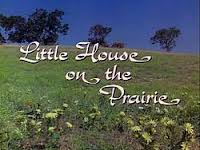 To have a family that supports me in all the ways a child could dream of.

Never to give up and believe in yourself.