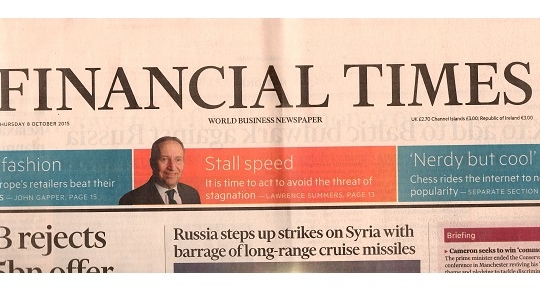 Hip To Be Square

Whenever the popular press presumes to write with authority about chess, the self-appointed custodians of the game (that’s us) get sniffy, usually with good reason. When chess hits the headlines it tends to trigger a reflex in newspapers. They (tabloids especially) reach for their trusty back catalogue of tired old tropes. Nerds or nutters are name-checked within a couple of paragraphs. A few illustrative anecdotes are lifted from Wikipedia or barrel-scraped from some website and then pasted together using common chess expressions Joe Public will understand. Come to think of it, some chess writers operate in a similar fashion. We’ve all read this type of article: straight out of the hack journo’s handbook.

The press rarely takes chess as seriously as we feel it should. Sad but true. That the UK’s Financial Times should devote one of its influential Special Reports to the game (‘FT Chess’, Thursday 8 October) was a welcome surprise; more than that – it was a cause for celebration.

The FT still commands respect. Of all the broadsheets it is arguably the least tainted by scandal, editorial bias or vested interests. It stands in marked contrast to, say, the right-leaning Wall Street Journal or The Times (London) whose discredited monopolistic owner and disgraced lieutenants are allowed unaccountably to carry on living their charmed lives. Ever since the ‘greed is good’ Gordon Gekko 1980s, the slogan ‘No FT, No Comment’ has delivered its blunt message to businessmen: Read the FT or some corporate killer will have you for breakfast.

The FT retains the loyalty of its well-heeled professional audience by seasoning its daily diet of business news with broad coverage of the arts, culture and leisure. There’s also a weekly supplement advertising fine art, yachts and Caribbean islands, a sort of Exchange and Mart for the super-rich, tempting them to indulge their expensive tastes. The dependable Leonard Barden has written its weekly chess column for 35 years.

The Times employs some excellent writers but only a P45 can rescue its chess column from the neglect that has made it a standing joke for thirty years.

But I digress. How did the FT use its four big, well-designed and expensive broadsheet pages to survey our game? To find out you will need to take out a trial subscription or visit your local library (if you still have one), because the report isn’t freely available online. In the meantime let’s peek through the crack in the FT’s paywall. 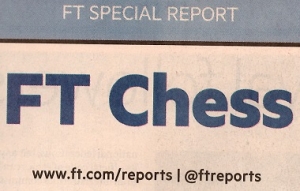 in headlines and straplines

Technology aids cheats but also helps root them out

A roundup of the main chess cheating scandals concludes that ‘brazen cheats are fairly easy to unmask’. Comments from Vishy Anand and Daniel King.

Quarter page ad for Legacy Square Capital, ‘one of the leading experts in investing in Russia and CIS countries’. 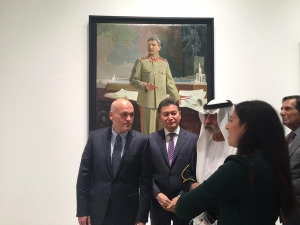 ‘The re-election of Fide’s president has not stopped calls for reform, writes James Crabtree’

Some sharp insights but Mr Ilyumzhinov emerges largely unscathed beyond being compared with Sepp Blatter. Indeed he’s described as ‘charming’ and ‘a natural politician’. The darker allegations against him are invisible. Kasparov’s political skills, on the other hand, are found wanting:

Perhaps the FT doesn’t want to risk upsetting some of its friendlier Russian oligarchs.

This sweep of the software firm’s history and growth contains the bold claim that ‘Chessbase is largely credited with having democratised chess as it gives anyone who has a laptop and a couple of hundred euros instant access to practically every top-level game ever played.’ That could have been dictated by the company’s marketing manager. Co-founder Matthias Wüllenweber takes an unexpected stance on piracy: ‘We always liked piracy because people grew to love our software in countries where we would never have sold a single copy anyway.’

An ad the FT didn’t use

Search is on for sponsors with deep pockets

Full marks to the writer for giving golf and chess a comparative health check: it’s a good place to begin. Sadly it’s not long before he sets off Mr Horton’s well-tuned bullshit detector by referring to that statistic AGON plucked from the air.

Young Champ who is happy to be viewed as a nerd

‘Aged just 24, Magnus Carlsen is seen as a boost to the game’s image, says Adam Thomson’

The most newsworthy piece in the report starts inauspiciously with the interviewer competing with a smartphone for the world champion’s attention. The conversation picks up when the subject turns to the world championship system and, inevitably, nerds (kudos to the FT for filling three pages before mentioning the word).

A critical, well-written overview of Britain’s rise and stagnation in world chess. ‘The UK government does not recognise chess as a sport, so starving it of funds.’

Chequered board can improve children’s lives

A measured and cautious review of the evidence to support the case that chess can benefit children’s education that ends with a sceptical swipe at Kasparov’s How Life Imitates Chess. 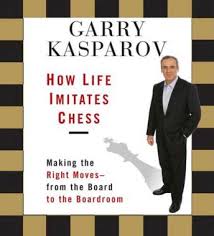 Most of the usual suspects are here, regrettably all playing sites. There ought to be a section on other web resources and blogs, The Week In Chess, S&B blog and Edward Winter’s Chess Notes, to name a few.

An interesting subject badly served here by trite writing. It’s little more than a list of films and plot lines framed by a single banal argument: chess is cinematic shorthand for scheming. The article might have been enhanced by being abridged to those six words above a quarter-page ad for Pawn Sacrifice. Would have made more commercial sense too.

As for pure chess content, there are four positions to solve: ‘Checkmates that you should know’, Anastasia’s, Philidor’s etc.

FT readers looking for some insight into the game’s rich history and literature (or even resources to guide them) will be sadly disappointed.

So there you have it, a quick digest of the FT’s take on chess.  It’s well worth seeking out the full report.

A final word to the world champion, who had the best line of all:

‘I am not only a chess player, I am a chess fan and a chess nerd. I want to follow everything that happens.’