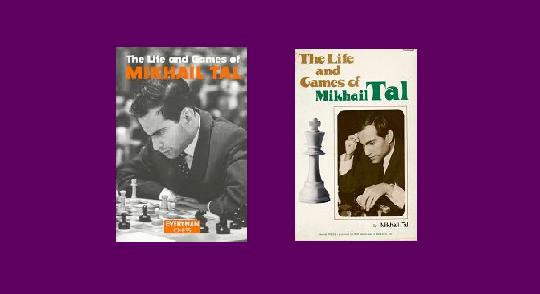 The Life and Games of Mikhail Tal

I recently had the good fortune to pass the night chez one of the strongest Swiss players of all time. Drooling over his amply stocked bookshelves I came across the original, 1976, RHM version of The Life and Games of Mikhail Tal. The binding had come apart, pages were hanging by threads, and the last two chapters were discovered all by themselves next to something by Harold Robbins.

‘Yes,’ he said. ‘The scene where she gets tatooed on horseback is just amazing.’

Ah yes, it’s a great book all right. It’s even a great Book (Tal-Böök, Stockholm, 1961, p.168). But it’s basically identical to the 1976 edition, which means that this is nothing like a complete story of Tal’s chess career – the last game dates from Moscow, 1975, yet there were many accolades still ahead of the 40-year young ‘Misha’ (e.g. 1st= at Leningrad, 1977, 1st= USSR Championship, 1978, 1st= at Montreal, 1979, +1 in the 1984 USSR v. Rest of the World match, as well as just missing out on the Candidates Semi-Finals as late as 1985). In the period 1981/82 he went over 80 consecutive games without defeat – an awesome total. His last Olympiad appears to have been Lucerne, 1982, where he scored +5 =3. A brilliant Tal performance came at the World 5-Minute Championship at St. John, 1988, which he won effortlessly. (Nigel Short told me that he was destroyed by Tal in friendly blitz games during Reykjavik, 1987 – the tournament where Nigel began with an astonishing 6/6. Tal finished 2nd=.) A sad footnote to the St. John success is that, according to Mikhail Gurevich, barely a week later, back in Moscow, Misha was complaining that he was broke. All his considerable prize money from Canada had already been spent or lost or given away. He died, just 55 years old, in 1992.

You can check all these results by consulting the full tournament and match record at the front of the book – one addition to the 1976 edition. There are also small corrections in analysis by the omnipresent Dr Nunn (‘This line just seems to lose a rook…’), and other misprints and errors from ye olde RHM have been semi-zonked. (N.B. One mistake spotted by this hawk-like reviewer: the diagram on p.195, a critical line from the famous 6th game of Botvinnik-Tal, 1960, is sadly all wrong.) However, more importantly, they have taken out all the photos! Now then, I don’t see why Joe’s battered old copy should have pics of Keres and Gaprindashvili and Petrosian while my new one is devoid of all human face or flesh, the excellent cover excepted. I suppose it’s something to do with money.

Here are some classic chess books with photographs in:

My point being: stars deserve snaps. If Tal doesn’t qualify, who does? 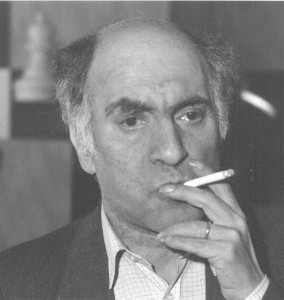 Throughout his career Tal was plagued by health problems, and naturally his results suffered. However, it is important to remember that Misha’s love affair with cigarettes and alcohol was entirely self-administered, and some of his chapter headings (‘Unwell Again’, ‘Recovered’) almost seem to drag his ailments into centre stage, as if his diseased kidneys were as integral a part of M. Tal as all his wonderful combinations. He tells us that it was during the USSR v. West Germany match in Hamburg, 1960, that he first became a ‘real’ smoker, buying a packet of untipped Camels. He gives us the name of his surgeon in Marianske Lazne. Before his 1965 Candidates Final with Boris Spassky, Tal’s doctors in Riga discover something ‘completely imaginary’ in his lungs, and prescribe a course of foul medicines. After he loses the match, the doctors in Tbilisi pronounce him ‘perfectly healthy’. In 1967 he does ‘a bunk’ from hospital, turns up at the Moscow International, and finishes joint 2nd. And so it goes on. In 1969, after his kidney is finally removed, some newspapers in Yugoslavia even report Tal’s ‘complete and final “defeat”’ – this in the final chapter of the book, ‘My “Death” and My New Life.’

In Curacao, 1962, when Tal was so ill that he had to withdraw from the last cycle of the tournament and be hospitalised, Fischer was the only one of the other participants to go and visit him. In Bobby Fischer: Profile of a Prodigy Brady also says that Tal was ‘hurt’ that none of the Soviet delegation came to see him. Typically, you won’t find any of this in Tal’s book; he speaks well of everyone, and even when he has good reason to grumble (such as over the arrangements with Botvinnik and FIDE for the two title matches, or when he was dropped at short notice from the USSR Olympiad squad at Lugano) Tal remains remarkably detached, even if we can clearly see what he would like to say. He admits his occasional indiscretions with good humour (‘When I want to win against Benko, I win; when I want to draw – I draw’ was his roguish comment to the press after the famous dark glasses episode at Bled), but more often shows us his playful, boyish side, such as when he ‘forgets’ to press his clock against Nona Gaprindashvili because he doesn’t want to win on time. ‘If you do that again, I’ll resign straight away!’ is Nona’s splendid reply. 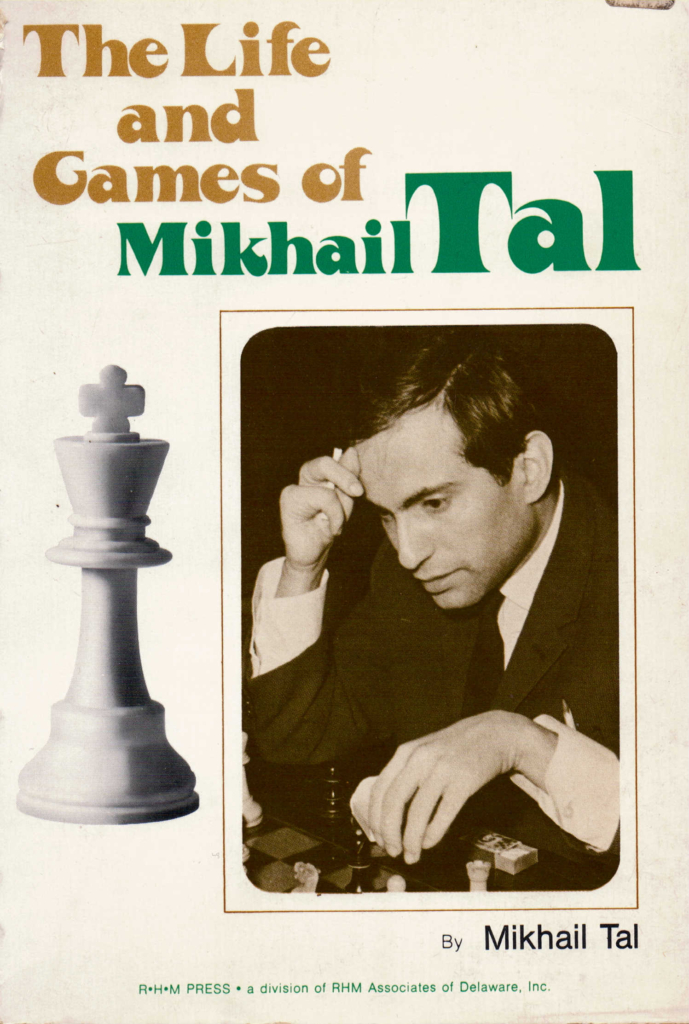 The games speak for themselves, and the modest, self-effacing notes are a welcome reminder that even the world’s best rarely play perfect chess. Phrases like ‘…the impulsive Wade could be expected to sacrifice the exchange…’ (!) or ‘As Petrosian was making this move, Spassky and Geller walked past and smiled’ reverberate with nostalgia.

‘Normally I play this opening badly’ is another great comment. Can you imagine Gazza or Tolya using that line in their next manuscript?

The narrative approach of the book is justly famous: Tal is being ‘interviewed’ by a ‘journalist’ throughout; the questions cover all aspects of Tal’s career, and often the journalist will suddenly interrupt Tal’s answers to say something like, ‘Just a minute! How was it that you sacrificed a piece, without special justification, against a grandmaster?’ or (my fave) ‘I have a photograph from the beginning of the third game. Spassky is sitting at the board, bent low and ready to spring…’ It all seems authentic, and yet right at the start we have: ‘Dialogue between a chess player and a journalist (instead of an autobiography); dramatis personae: A CHESS PLAYER. Mikhail Tal. A JOURNALIST. Who knows, perhaps alias…’ Conventional wisdom is that Misha played both parts, White and Black, all the way through…

If you have the RHM edition, and it’s still in good nick (unlikely), you don’t need this Cadogan clone. Otherwise, foresake the latest Winning With… or How to Play… title you’d set your wallet on and take Misha home instead – you won’t be disappointed.

I was fortunate enough to meet (and beat) the great man once, in Tbilisi, 1988. He didn’t know me from Adam Raoof, but was extremely courteous in the post-mortem, politely pointing out why my analysis was often, but not always, a load of crap. It was chess heaven.

On the free day I was invited to share some of his thermos of warm vodka on the excursion bus, and everyone crowded round as a drunk Misha regaled us with stories from his glorious past. My horrendous loss to Gufeld the next day didn’t matter in the slightest.

Alexei Shirov, fellow Latvian (okay, Spaniard) says the following in Fire on Board about getting to know Tal personally: ‘I was still too weak to understand his chess ideas at that time but I remember being covered in smoke (approximately ten cigarettes an hour).’

My favourite Tal story concerns Neil McDonald. As I remember it, Neil went to the USSR for an all-play-all, and had to meet Tal in the first round. Thrilled to bits at playing his hero, and remembering Tal’s legendary first-round faiblesse (Misha lost a huge number of first round games throughout his career; N.B. Tal-Conquest, Tbilisi, 1988, was played in round 6) Neil couragously offered a pawn quite early on, challenging his fiery opponent to a battle royal. A red-haired Englishman offering a pawn to the Old Magician! The great maestro blinked, took it, swapped queens, and won the ending. Ah. There was only one Misha.