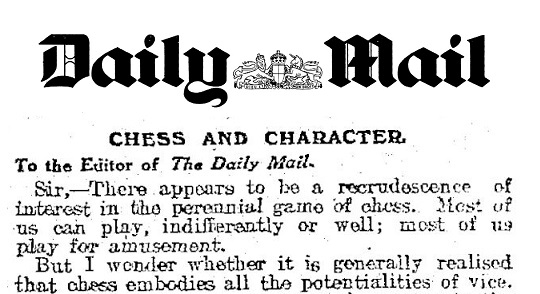 ‘All the Potentialities of Vice’

Sir,—There appears to be a recrudescence of interest in the perennial game of chess. Most of us can play, indifferently or well; most of us play for amusement.

But I wonder whether it is generally realised that chess embodies all the potentialities of vice. The proof can be seen in every chess-room in the country. Hardened devotees of the game, with few exceptions, bear conspicuous witness in face and bearing to the degeneracy wrought upon their physical and mental character. The game seems to dry the springs of energy and ambition.

I have known men of pronounced artistic and musical ability who have allowed their talent to die of inanition through the playing of chess from morning to night. At the same time, their families have suffered all the vicissitudes commonly resulting from the vice of drink or gambling, to which state of affairs the mainstay of the home has displayed callous indifference. 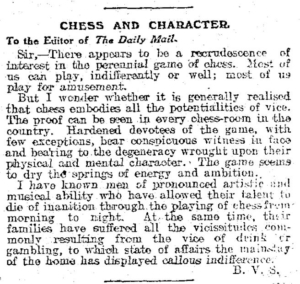 Sir,—The severe, but chaste and elegant, language in which “B.V.S.” denounced in his letter of August 29 a game that—to quote his own modest words—“most of us can play, indifferently or well,” reminds me of a Swiss admiral criticising the manoeuvres of a battle fleet.

Unintentionally, perhaps, “B.V.S.” reprobates some features of my own character, which have caused me much uneasiness during the last sixty years or so of a chequered career.

Why, I have (in lucid intervals) asked myself, did I not realise at an early period of my existence that “chess embodies all the potentialities of vice”?

Why, instead of yielding to the insidious fascinations of this diabolical and demoralising pastime, did I not devote my energies to the ennobling task of kicking a large leather ball, or, pari passu, climbing a greased pole?

“B.V.S.,” in concluding his philippic, laments the sad lot of chess players’ families, “who have suffered all the vicissitudes commonly resulting from the vice of drink or gambling.”

As a rule, the devotees of chess, deeply absorbed in their game, eat little and drink less. They are, however, desperate gamblers. Stakes ranging from a penny to a shilling are sometimes wagered on the result of a long struggle for supremacy, and I have known reckless plungers to win or lose at chess fourpence at a single sitting. 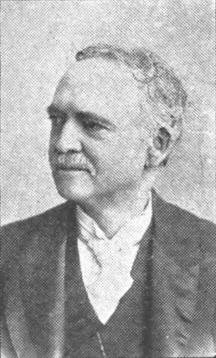