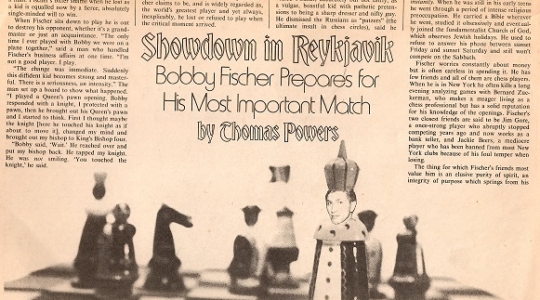 ‘The thing for which Fischer’s friends most value him is an elusive purity of spirit, an integrity of purpose which springs from his respect for chess not just as a game or an intellectual discipline, but something eternal, beautiful and true. This unbending dedication does not make him easy to be with, however.

Behind all discussion of Fischer’s prospects in Iceland is the assumption that a Fischer defeat is not only unlikely but unthinkable. Fischer’s entire life has been a prelude to this match. Part of his strength as a player has been his willingness to make personal sacrifices for chess no one else has been ready to equal. He dedicates himself to chess the way other men dedicate themselves to philosophy, mathematics or God. He studies the game harder, he has a deeper respect for its inner beauty, he plays for the game and does not flinch from the dangerous position that winning is everything.

Other players hold back some fragment of their self-respect. Faced with defeat, they are ready to console themselves with the thought that, after all, chess is only a game. Fischer holds back nothing. For him chess is not a game but life. He risks everything—pride, identity, manhood—every time he sits down to play. If he lost to Spassky . . . Fischer’s friends hesitate to go on.’