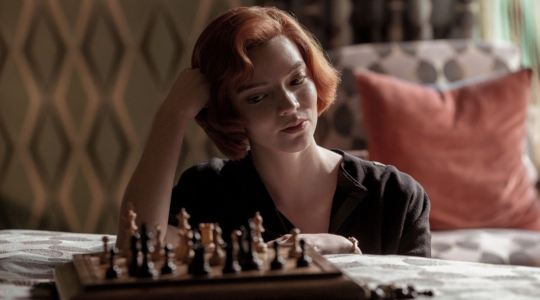 Chess is Never Square in The Queen’s Gambit

The Queen’s Gambit is an entertaining Netflix drama based on a novel that presents chess in a positive light and makes all the right points about women’s struggles on and off the board. It’s hard these days not to see all period drama as a heavy-handed reflection of what’s going on now (The Trial of the Chicago 7 is another obvious example), but that’s OK, because it’s easier than looking at the horrific scenes around the world on the news. Years ago we might have thought of 1960s attitudes as rather quaint and backwards, as in Mad Men, but we’ve come to realise that things have hardly improved. On the other hand, in chess if you are a great player you get respect, regardless of gender. 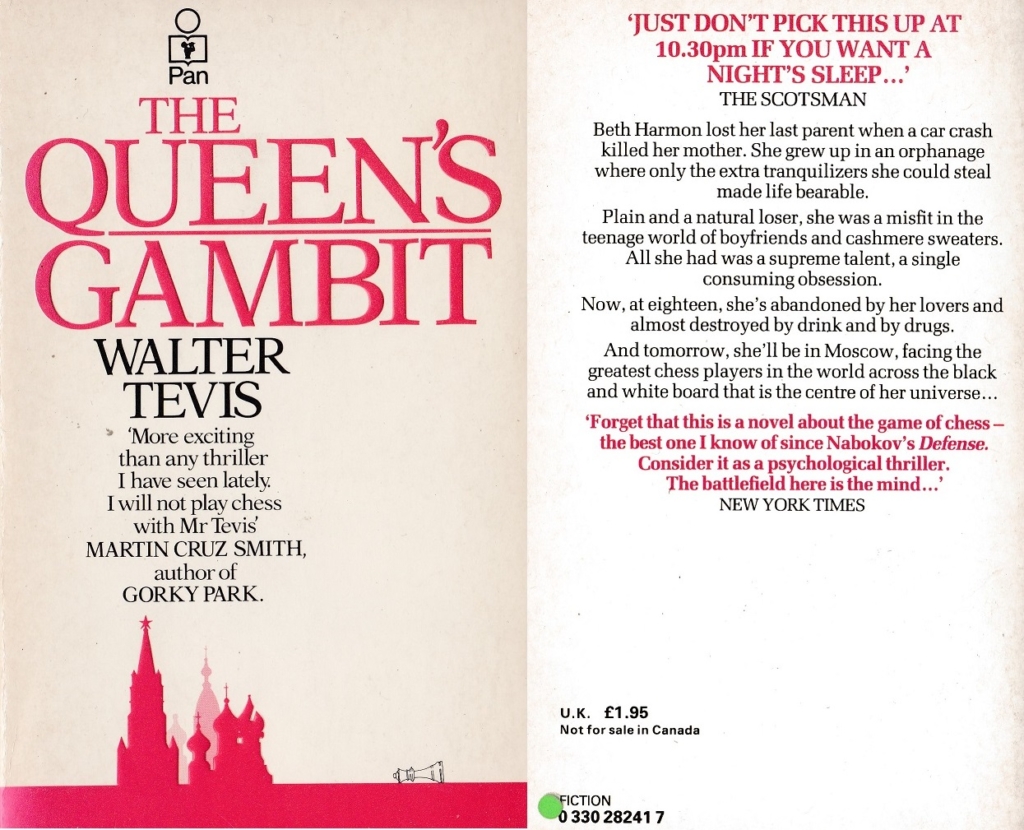 The main character in The Queen’s Gambit, Beth Harmon (Anya Taylor-Joy), learns chess from the janitor in an orphanage after her mother dies in a car crash, and becomes addicted to the tranquillisers that are handed out there. They remarkably enable her to visualise giant chess pieces moving upside down on her dorm room ceiling. Beth is later adopted by a couple in a nearby Kentucky town, but the father soon leaves because the mother, Alma (Marielle Heller), is an alcoholic. Stuck without money they discover that Beth can use her talents to win prizes, and Alma becomes her devoted manager as she rapidly ascends to the international chess elite. 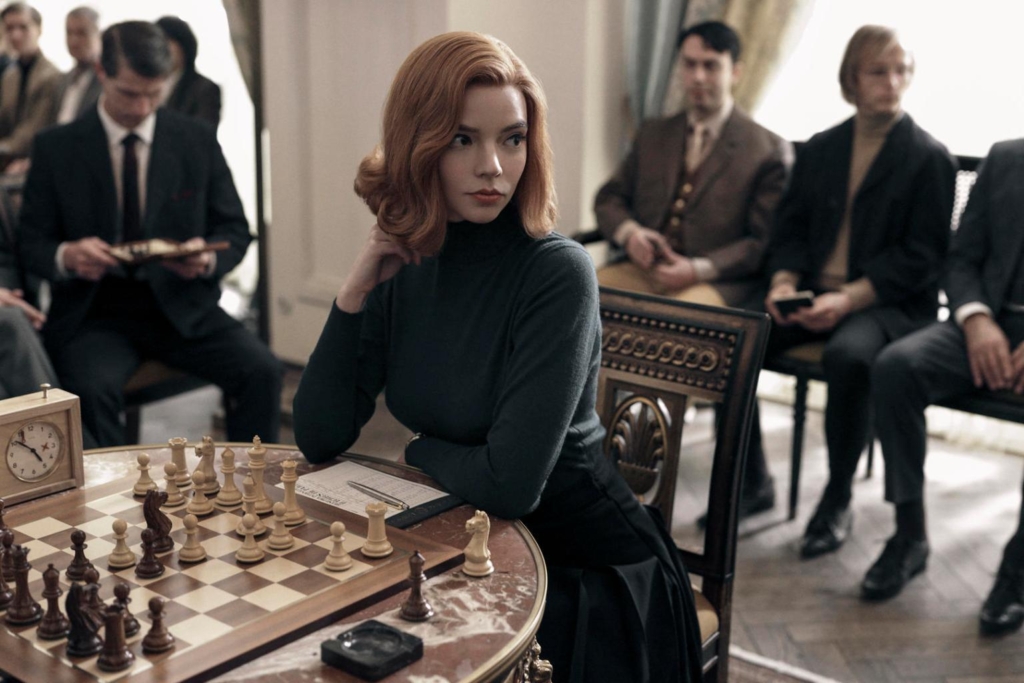 Competitive chess is depicted fairly accurately, with real games played out on the boards, but there are a few annoying moments. When janitor Mr Shaibel (Bill Camp) demonstrates the Queen’s Gambit to Beth, he has actually only played 1.d4, and the Queen’s Gambit position isn’t shown on the board. It would have been nice to at least explain that to the non-chess playing viewers as it is the series title. Similarly more could have been made of Beth’s use of Capablanca’s book My Chess Career, which only appears briefly. Chess games are always referred to as “matches”.

A commentator watching one of Beth’s games says the Sicilian is one of the most common openings for White, then adds that her Russian opponent is playing a Closed Sicilian, “the Rossolimo”. Scriptwriters seemed to have spent too much time in their chess glossary when Beth’s friend Benny (Thomas Brodie-Sangster) asked her, “How about some speed chess? Or we could play some skittles, or blitz?” What’s also funny is that Chess Review is prominently displayed in a Kentucky pharmacy alongside the leading US news magazines. 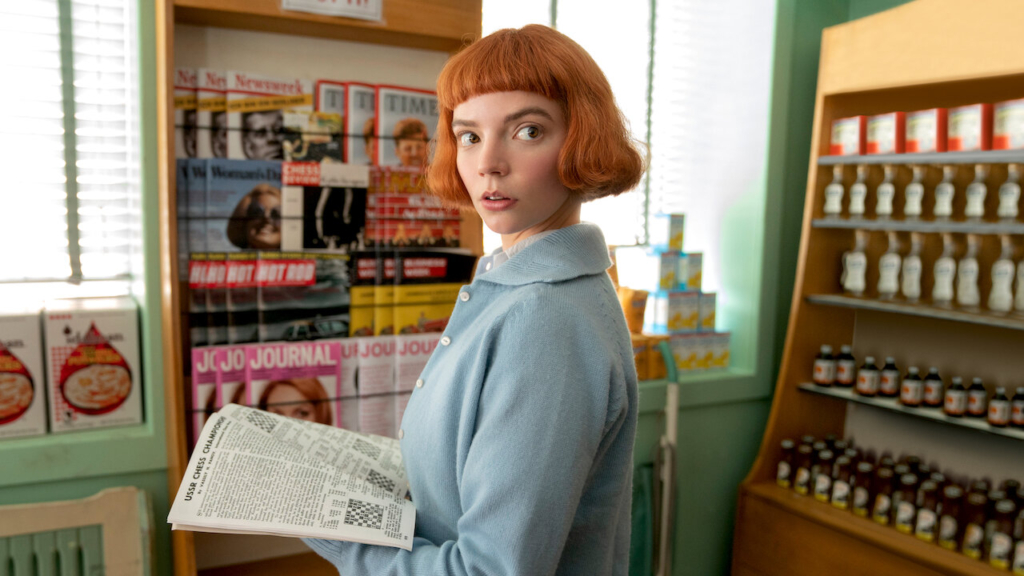 Beth doesn’t obtain any chess title although her male colleagues have titles. Nevertheless she is soon up against world champion Vasily Borgov (Marcin Dorociński). At least the Russian spoken in the series is authentic. Since there’s no Bobby Fischer in the story, Beth is America’s most successful player, yet the US Chess Federation can’t afford to send her to a tournament in the Soviet Union and she is offered sponsorship by a Christian evangelical charity. This doesn’t seem to be due to sexism but the low status of chess in the United States, as emphasised by the shabby venue for the US Championship Beth plays in.

Beth’s problems with drugs and alcohol spiral, and a friend warns her that she is going to turn into Paul Morphy. The issues stem from her troubled childhood, but it’s suggested also that as a chess genius naturally she is likely to go insane. An interviewer for LIFE magazine bizarrely suggests that she should take up bridge, after praising her incredible youthful successes. Racial issues are also touched upon in Beth’s friendship with Jolene from the orphanage (Moses Ingram). It seems odd that Beth would stay in a suburban house in Kentucky as an adult while competing all over the world, instead of moving to New York. Other chess players try to help her and she has odd sexual encounters with them, but she is left alone for long periods to flounder.

The series ends by making another political point, as Beth is mobbed by adoring fans in Moscow and finds streets lined with the Soviet version of chess hustlers (which she would have seen in New York), while being instructed by her CIA handler to tell the press how much better life is in America. It is understandable that for visiting chess players the Soviet Union might have appeared to be a paradise. But in real life America did back Bobby Fischer and he represented his country in team events, which Beth doesn’t do. Of course, she should probably also have been disqualified for doping. The messages of The Queen’s Gambit are somewhat confused, but it’s a fun watch in between games of blitz, or skittles.