A son, a father, and the world’s most dangerous game 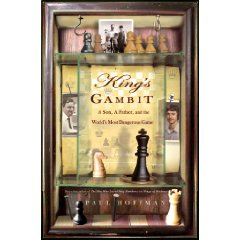 Paul Hoffman hit on a great idea for a book, but I’m not sure that he was aware of it. By the end of King’s Gambit I’d finally worked out what the book should have been about: relationships between parents and children in the chess world. This is certainly a theme of the book, but too often it’s mentioned in passing rather than investigated in depth, and the topic could have given the book a structure that it sorely needs.

What more intriguing cast of characters could there be than Laszlo Polgar and his hot-housed daughters, Gata Kamsky and his thuggish father, Simon Webb (author of Chess for Tigers) and his drug-dealer son who stabbed him to death, Claude Bloodgood the correspondence player in jail for murdering his mother, Nigel Short and his young son who knows more about Greece than he does, or Jesse Gilbert and her father whose abuse was alleged to have caused her to plunge from a hotel window?

These are some of the stories that Hoffman alludes to, while placing his own troubled relationship with his father at the centre of the book. This is one of the most compelling aspects of King’s Gambit – partly because it will be completely new to the reader, whereas many of the chess anecdotes won’t be. His experiences with his father gave  Hoffman an ambivalent attitude towards chess and in fact he gave up the game as a young adult and only returned to it a few years ago. In the interim he became publisher of Encyclopaedia Britannica and the bestselling author of The Man Who Loved Only Numbers, a biography of eccentric mathematician Paul Erdös.

Hoffman’s parents separated when he was 12 and his father moved to Manhattan’s Greenwich Village, where he wrote sensational magazine articles and spent the rest of his time playing cards, billiards and table tennis as well as chess (badly). Hoffman’s father took him to the chess shop owned by Nicholas Rossolimo, who was also driving a cab at the time and drinking too much (not simultaneously). Hoffman beat the inebriated Rossolimo at chess and the grandmaster dropped his king into a bowl of broth in disgust. So already as a boy Hoffman learned that chess was personal.

Later Hoffman’s father felt threatened by his son’s chess ability and attempted to discourage him from playing the game by leaving an essay about Paul Morphy lying around for him to read. According to the author of the essay, Ernest Jones, chess is about Oedipal impulses and Morphy’s play in particular demonstrated his anal-sadistic aggression towards his father. “Staunton became the substitute father figure, Jones concluded, and when Morphy didn’t get a chance to sublimate his homo-patricidal impulses by buggering Staunton on the chessboard, his psyche collapsed.”

But, as I said, King’s Gambit isn’t really a book about parents and children. It’s a rather self-indulgent exploration of the oddities of the chess world, in which Hoffman gets to know various players and tries to understand what makes them tick. He befriends Pascal Charbonneau, the Canadian grandmaster who is dating Irina Krush, and in one of the highlights of the book, Charbonneau and Hoffman travel to Libya together for the 2004 World Championship. Hoffman wants to watch a professional player preparing for important games, but Charbonneau will do anything to avoid preparing for his bout with Etienne Bacrot, including analysing Hoffman’s own games.

Unsurprisingly, Charbonneau lost to Bacrot, but as MasterCard might say, the experience in Libya was priceless. As a journalist, Hoffman endured constant scrutiny from the not-so-secret police, who assumed he was a spy, especially since he kept requesting a meeting with Colonel Gadhafi. Meanwhile, Charbonneau explained how he used to get so sick before important chess or tennis matches that he’d throw up; this gave him something in common with Hoffman, who also suffered from various semi-psychosomatic ailments, including breaking out in hives after a stressful dinner with Kasparov.

Hoffman devotes some attention to women chess players, covering much of the same ground as Jennifer Shahade did in Chess Bitch. Kasparov’s views on women and chess are noted, and the story of his take-back against Judit Polgar is retold. Hoffman attends a demonstration match between Jennifer Shahade and Irina Krush at a Manhattan art gallery, where the players wore all-black and all-white, including wigs.

It’s clear that women bring glamour and excitement to chess, as they do in tennis. As for why they can’t usually reach the highest echelons of chess, every player has their own theory. As Shahade says, “I’m more interested in doing something about it than in debating hypotheticals.”

Also in relation to women’s chess – and with his own father’s distorted life story in mind – Hoffman takes a sceptical look at the biography of  Paul Truong, Susan Polgar’s manager. Truong claimed to have won Vietnam’s first National Junior Championship at the age of five, then to have escaped the country with his father by boat, surviving five attacks by pirates. The boat’s passengers ended up on a desert island, where they stayed for about six months before somehow making it to the United States. Hoffman asked Truong if he could talk to his father about the story, but Truong never gave Hoffman the contact information.

King’s Gambit features an extensive notes section at the end, and many of the notes tell stories that are as lively as those in the main text, ranging from the identity of Bobby Fischer’s father to the causes of famous chess players’ deaths. Hoffman continues to pursue his interest in the game on his personal blog at  http://paulhoffman.wordpress.com, where he writes entertainingly about chess events books. Having discovered the rollercoaster chess world for the second time in his life, he apparently hasn’t been frightened off yet.