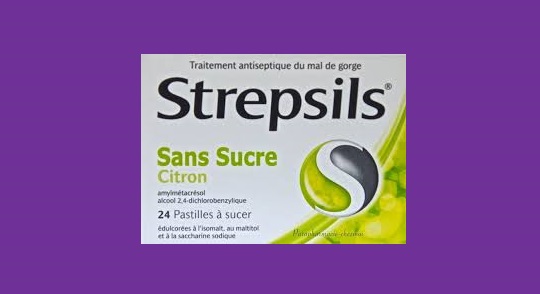 Frog in the Throat

The late Neil Carr recounted this anecdote in Kingpin 12 (Autumn 1987).

The French International U-21 Championship held in Montpellier in April was a well-run 9 round tournament which produced some fine attacking chess. It was won by L. Stratil of Czechoslovakia (Strepsil to his friends) with 7/9, and on balance he probably deserved it as he was by far the most solid player in the tournament. In joint second place came a slippery Frenchman called Jean-Marc Degraeve and our own Chris Ward, whose performance was particularly astounding considering that he had to share a room with me for 7 days.

Chris led the tournament for most of the way before losing to Degraeve two pawns up in Rd.7, and Degraeve also swindled me in Rd.9. so you can take it from me that he was pretty slippery.

I ended up in joint 4th place with 6/9, along with Mark Burgess from Scotland, Harovelo from France and Wessman from Sweden who certainly had a most peculiar tournament. after 6 rounds the Swede, who had been playing more like a cabbage up to this point, had 2½ points and had adjourned in the following complex position against the weakest player in the tournament. 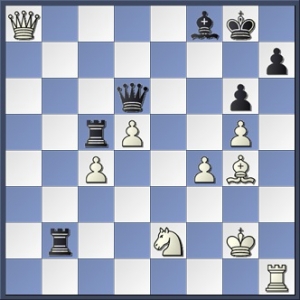 Wessman was however very confident with his position the night before resumption and had been idly sipping at extravagant cocktails with Chris, Mark Burgess and I. At around 11.30 that night though he brought out his pocket set and challenged us to find something for his opponent in this seemingly hopeless position. After a few drunken suggestions when Black seemed to mop up White’s pawns with consummate ease, we were just about ready to forget about the position and get back to the serious business of ordering a few more Tequila Sunrises. However, Chris and I suddenly had a touch of inspiration.

We screamed at the same time, and the Swede almost swallowed the plastic tube through which he had been sucking his drink. That line was the last straw! (Thank you so much -Ed) 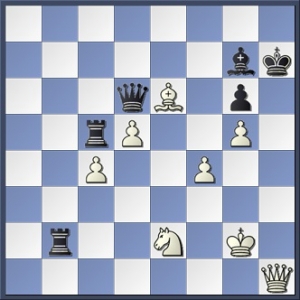 We were in a fit of giggles while the poor Wessman analysed the ‘Monopoly board’ for the next half an hour in a drunken stupor (which seemed to have been exacerbated by the shock he had just been dealt).

We generously consolded him with comments like ‘Collect £200 for passing Go’ and ‘Maybe he won’t see it – after all, he’s a real bunny’. However, the latter comment was actually a premonition as Hajdaj from France played 1 Qa1? Bg7 2 Be6+?? Qxe6! and lost soon afterwards.

Wessman rode his luck, won his next two games, and narrowly failed to beat Strepsil by one tempo in the last round in a game which would have meant him coming first had he won! Thus proving that a frog in the throat isn’t as bad as a Strepsil!