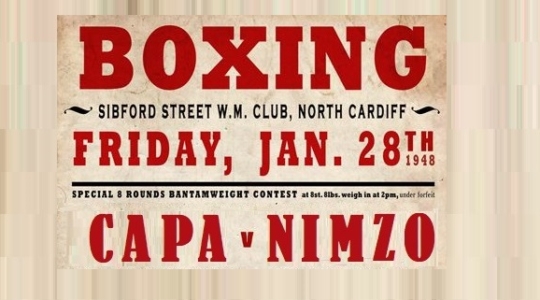 Capablanca and Nimzowitsch: A Confrontation . . . Let’s get rrready to RRRRRuummmmbbbbbblle!!!!!

Capablanca and Nimzowitsch were brilliant players whose names are revered to this day. However, these two men were completely different in their approach to chess. Nimzowitsch, scientific and methodical, one of the founding fathers of positional chess and author of My System, a book which is still in print.

Capablanca, on the other hand, was a natural genius. Not for him the rigours of a complex scientific system – brilliancies just seemed to flow from his fingertips every time he played.

Both were players of the highest order, but the question that most chess aficionados would like answered is: which of them would have won in a street fight? The cocky Cuban pretty-boy or speccy slaphead Nimzowitsch?

They met in the St Petersburg tournament in 1914. Strong-minded men with differing views on the game. No one was surprised when it ‘kicked off’. The Times alluded to ‘an unseemly altercation’ between the two men but gave no details. Only now, after the discovery of eyewitness accounts, can the full story be told. At St Petersburg Lasker defeated Capablanca in what Bill Hartston calls ‘a magnificently subtle victory’ in his book The Guinness Book of Chess Grandmasters. Hartston goes on to recount that Capablanca ‘laid down his king and silently rose from his chair, deathly pale. The two masters did not shake hands.’ So what happened after that? Emanuel Lasker takes up the story:

‘Well, you see, I went to see Mr Capablanca after the game and just caught him leaving the hotel. I commended him on a fine game that I had thoroughly enjoyed and assured him I could not play to that level all the time. I felt he was still the favourite to win the return game. However all the Cuban said was “Ahhh piss off.” I was mortified by the fellow’s response and as I stood there dumbfounded he suddenly turned quite nasty, grabbed my lapels and held his fist right up to my face. “Do you want some then?” he enquired, “Do you ****ing want some?” I hastily assured him that I did not want any trouble and managed to break free.

I walked away with as much dignity as I could muster but the Cuban followed me and started making clucking noises and beating his arms like a chicken. To be fair to Mr Capablanca, I think he had been drinking so I hastened away and called over my shoulder “You are somewhat the worse for drink, sir. I feel you will regret your actions later, upon sober reflection.”

I hailed a hackney carriage and departed the scene. That is all I can contribute as an eyewitness. I did not actually see the famous fight between him and Nimzowitsch, and the whole unfortunate incident between Mr Capablanca and myself was something that I refused ever to speak of again. However having been dead since 1941 I now feel I can recount my part of the story without overmuch embarrassment.’

To continue the story, we must turn to the great Dr Siegbert Tarrasch:

‘I exited the playing hall and was much amused to see Mr Capablanca strutting behind Mr Lasker performing what looked like some sort of Vaudeville chicken impression. As Lasker left in a hackney Capablanca turned to the players assembled there and 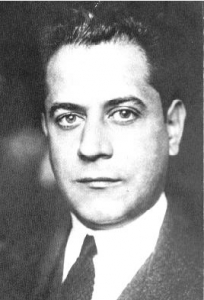 not scared of a fight

said, “Come on then, who’s first? I’ll have the lot of you.” He lurched towards Mr Alekhine and the young man recoiled in trepidation. Then he turned to Rubinstein who advised him to calm down. It was at this point that Mr Nimzowitsch appeared from the shadows saying “I’m your huckleberry.”

Capablanca visibly blanched at this new development as Nimzowitsch was widely known to be ‘a bit handy’ and was not one to back down from a fight whether it be over the chessboard or in the street!
Capablanca walked towards Nimzowitsch with a conciliatory “Look mate, there’s no need to…” before swinging a massive right sending Nimzo’s specs flying across the room and drawing a trickle of blood from the corner of his mouth. Nimzowitsch just wiped it away with his sleeve and shot Capa this really evil look.

The two men slowly circled each other. Mr Nimzowitsch’s cheeks were flushed red, his teeth clenched and his breathing heavy. He was certainly up for this fight. Suddenly he dashed at Capablanca and butted him on the nose with his head.

With his natural cunning and resourcefulness, Capa quickly put Nimzowitsch in a headlock and start thumping him with his right hand. It looked like the father of positional chess was in deep trouble and destined for an early bath but Nimzowitsch managed to trip his adversary up and both men fell sprawling to the ground.’

‘Despite what the record says, I didn’t chicken out of that fight with Capablanca, I just stepped back a bit to give myself more room if he came at me. As to the fight, both men fell to the floor. I think Capablanca’s pocket watch detached itself from his waistcoat and they rolled over it, breaking the glass. Mr Nimzowitsch lost several buttons from his waistcoat whilst both men’s shirt collars had come loose. They looked like a music hall duo. It was Capa who recovered first and clambered on top of Nimzowitsch, sitting on his chest and pinning his arms to the ground with his knees. Capablanca then addressed Mr Nimzowitsch thus, if memory serves:

“How would you like a bit of MY system, you positional ponce” and started to punch the prostrate Nimzowitsch again and again.

To this day I don’t know how Nimzowitsch did it but he somehow managed to free himself, just as he had a habit of escaping miraculously from the most perilous situations on the chessboard. He upended the great Cuban and the two scrambled quickly to their feet and faced each other again.’ 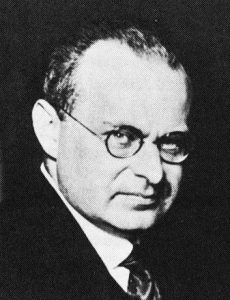 harder than he looks

‘Yes, the two men were standing face to face. I think I said something poncey like “Come on now, gentlemen, calm down, this isn’t the proper way to behave,” but Nimzowitsch couldn’t hear me, he’d gone totally mental and raising his arms let out this weird high-pitched shriek and ran at Capablanca. He got him with a terrific punch square on the jaw and Capa fell backwards out of the door.

We all quickly followed outside and saw Nimzowitsch again leap at Capablanca. The two foremost chess masters of our age tumbled down the hotel steps kicking, punching and clawing at each other as they fell. I think it was this fall that finished the fight, they were both a bit knackered by it, but as they stood up to start again, both looking the worse for wear and near exhaustion, a group of Muscovite sailors came walking by. The sailors restrained the two men and were highly amused to break up a fight between two chess masters – the sailors were usually the ones to be found fighting. Nimzowitsch saw the funny side of this and extended his hand towards Mr Capablanca to end the feud. Capa just looked at him sullenly, turned on his heel and walked away.’

So the question is, therefore, who won?

Akiba Rubinstein said: ‘Well, it was Nimzowitsch who was the first to try to make friends again, which makes him a bit of a puff, so I say Capa had it.’

Lasker, however, has a different view: ‘The friendship between Mr Rubinstein and Mr Capablanca is well noted, there may be some degree of partisanship which has encouraged Mr Rubinstein to find in favour of his friend.’

‘Yes,’ he laughed, ‘me and old Capa were good mates, but I’m not just saying he’d have done the speccy get ’cos I’m his mate. No, I’ve seen Capa in action before and he can go really mental during a fight – “Capa the Tapper” was what a few of us used to call him. It’s lucky for Nimzowitsch that Capa didn’t lose it. Even though I was his mate, he would still lay one on me if I said something out of line. I mean, you remember that business with Euwe don’t you? Well that was Capa for you.’

Mr Rubinstein is referring to an incident during a game in 1922 between Capablanca and Dr Euwe. Capablanca had accused Euwe of ‘looking at him’ and threatened to lay him out. Rubinstein continues the story:

‘Well, Capa said that Euwe was looking at him and threatened to chin him if he continued. Dr Euwe knew what Capablanca was like and so rather than argue, just fixed his eyes on the chess board so there could be no further misunderstanding. As his position on the board deteriorated, Capa then accused Euwe of “looking at his bird”. She was there in the crowd watching the game. Euwe then had to sit at a 90 degree angle to the board. At that point Capablanca began to turn the game around, but Euwe managed to hang on and eventually win the game.’ 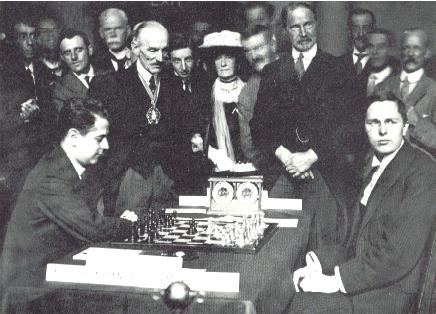 Euwe demonstrating he is NOT looking at Capablanca’s bird. She is the lady with the hat standing behind the chess clocks. Sir Walter Pemberton is the man standing to her left with hands clasped.

‘However,’ Rubinstein continues, ‘Euwe was a clever bloke and knew what Capa was like and had come prepared. He’d hired Walter Pemberton to act as a sort of minder. Old Pembo was known to be quite useful, so even though Capa was scared of no one he would think twice before starting any trouble.’

However, this aside, the question still remains: who won the fight?

Alekhine says: ‘I’d say it was a draw. Both men were still standing and the fight was stopped before there was a clear winner. The fact that it didn’t ever kick off again seems testimony to the fact that the two had developed a mutual respect for each other, as chess players and street fighters.’

This view seems to have been borne out by history. On hearing of the death of Nimzowitsch in 1935, Capablanca paid tribute to his old enemy: ‘He wasn’t scared of no one.’ When Capablanca died in 1942 Nimzowitsch returned the compliment: ‘He was one tough Cuban, that guy.’ 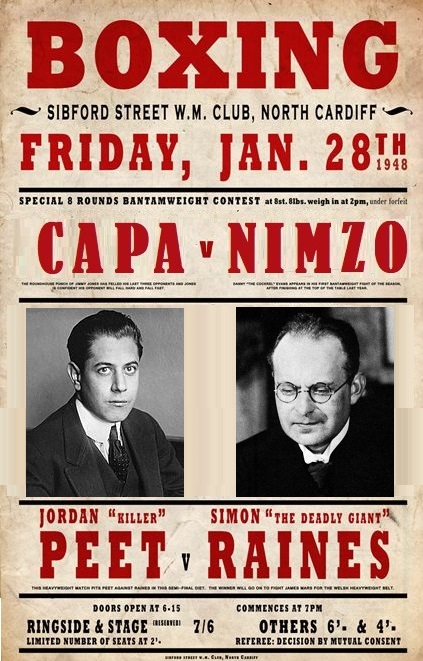 In the next episode: Chigorin pulls a knife on Blackburne, and Schlechter sets fire to Lasker’s hair.