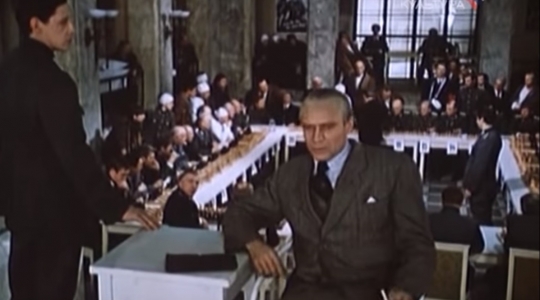 A Soviet film about Alexander Alekhine

Talking about Alekhine with chess friends recently, someone mentioned White Snow of Russia (1980), and it occurred to me that the film might be available on YouTube, like so many Soviet films – and it is. The film is based on Alexander Kotov’s book White and Black. It’s fascinating to see Alekhine depicted on screen, even in a production that is hampered enormously by the demands of Soviet propaganda. The lead actor, Alexander Mikhailov, is a rugged, handsome man who makes the character believable.

The first disappointment of the film is that it begins during Alekhine’s World Championship match against Capablanca in Buenos Aires in 1927. We have not only missed out on all of Alekhine’s early life and adventures, but don’t even get to see Capablanca himself – only the delivery of his resignation note. Nor is Botvinnik shown later in the film. The strong contrasts in these world champions’ characters and attitudes towards chess and life would have added depth, context and potentially some humour, which is lacking throughout this extremely earnest film.

Alekhine grew up in an aristocratic family in the years before the Russian Revolution of 1917, which understandably the film-makers were not anxious to remind viewers about. Their purpose was basically to restore Alekhine’s reputation – or at least to make him an acceptable person in whose honour tournaments could be held: deeply flawed, of course, but constantly regretting his un-Soviet behaviour.

Alekhine was at a tournament in Mannheim when the First World War broke out, and he was imprisoned there with the other Russian players, sharing a cell with Efim Bogolyubov.  This is not in the film, nor is his subsequent activity on the Galician front, where he was shell-shocked, nor his arrest in Odessa, where he was sentenced to death and then reprieved. We also miss out on Alekhine playing in the Moscow Championship in freezing conditions in 1919–20, and doing murky work for the Bolshevik police.

As I was researching this article I found that Nadezhda Fabritskaya was apparently Alekhine’s fourth wife. I had thought that she was his third wife, after Alexandra Batayeva and Swiss journalist Anneliese Rüegg, but according to an article by Yevgeny Gik written in 2012, Alekhine’s first wife was Anna von Sewergin, with whom he had a daughter, Valentina, so Fabritskaya was his fourth wife. 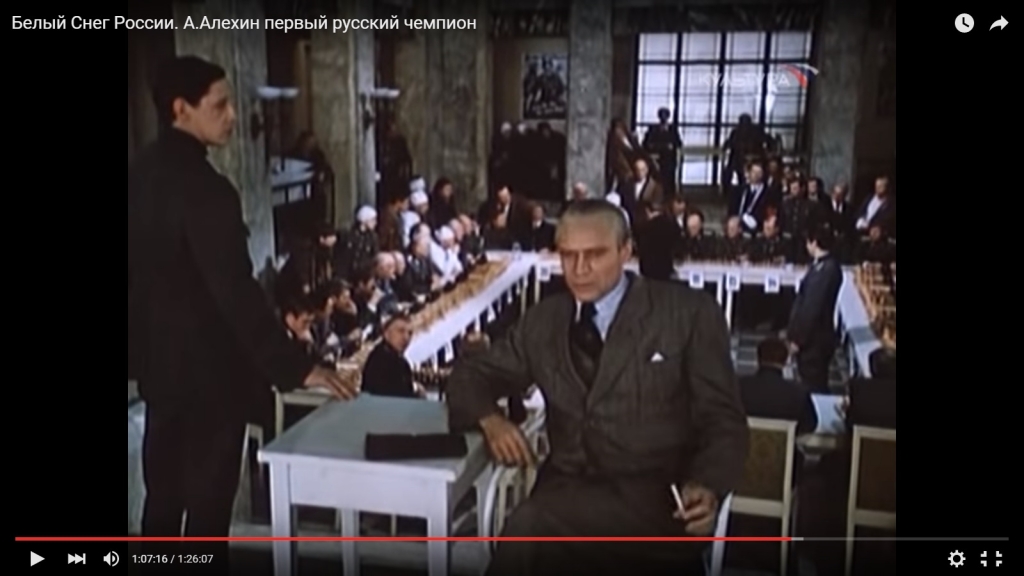 Fabritskaya is the first wife to appear in the film, a tender and loyal Russian woman – politically correct. The film overlooks the fact that Fabritskaya and Alekhine’s fifth wife, American widow Grace Wishaar, were many years older than him. Fabritskaya is shown despondent as Alekhine has an affair with Wishaar, but the claim in the film that Fabritskaya killed herself because he left her may be an exaggeration – I don’t know.

Another questionable moment in the film is when Alekhine is reported to have denounced the Bolsheviks in a speech in France after defeating Capablanca. This resulted in Nikolai Krylenko declaring him an ‘enemy’, which made him persona non grata in the Soviet Union. But in the film Alekhine refuses to comment on politics, and another émigré guest at the dinner makes the comment about the Bolsheviks. The émigré newspaper reports that these were Alekhine’s words and he storms into their office to complain. They explain to him that it’s time for him to make up his mind whose side he’s on. In other words, the film attempts to show that Alekhine was not anti-Soviet.

Salo Flohr (played by the sprightly Boris Galkin) is the most entertaining character in the film, bringing some light relief. He bursts into Alekhine’s drawing-room one day brimming with news from the Soviet Union about their flourishing chess scene, and Alekhine wonders if Flohr has converted to Communism. In the film it certainly looks like he has, as he excitedly reports news about Alekhine’s match with Euwe to Izvestia on the phone, like a dutiful Pioneer, in his strong accent. Up until now I never had any particular image of Flohr in my head – now I do, rightly or wrongly. 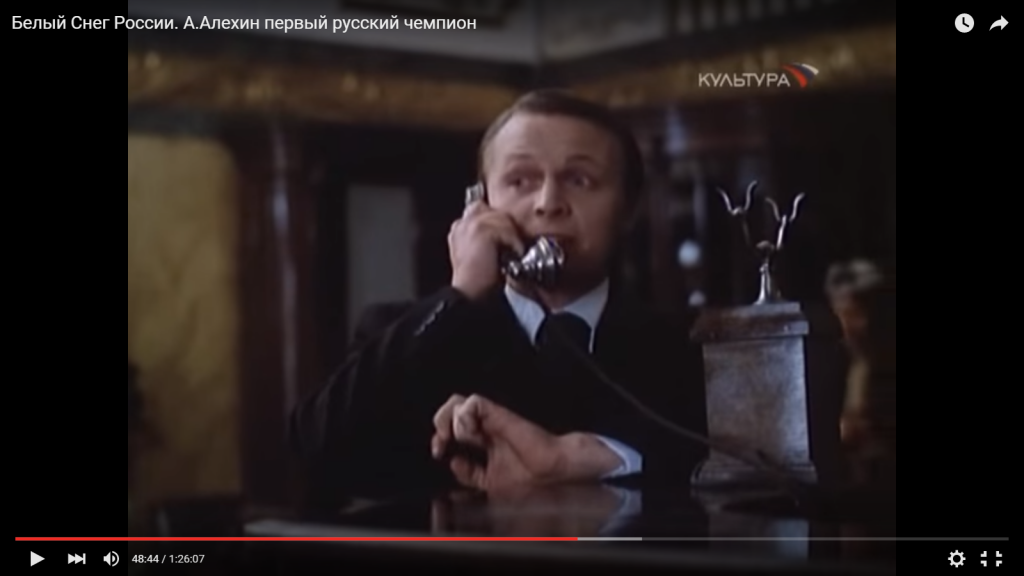 Flohr on the phone to Izvestia

Meanwhile, Emanuel Lasker begs Krylenko to save him and his wife from the Nazis by letting them live in the Soviet Union. Krylenko ponders the matter, although this was obviously a big propaganda coup, and says that if he brings it up with Stalin he will likely get a positive response. I’m not sure that this was exactly how things happened. According to Emanuel Lasker: Second World Champion by Isaak Linder, the Academy of Sciences in Moscow offered Lasker a membership and he decided to move there. Lasker and his wife left for the United States in 1937, at the height of Stalin’s purges, another small fact omitted from the film.

The Nottingham 1936 tournament is not shown, sadly – this would have been a chance to show Alekhine together with Botvinnik and Capablanca, and perhaps create some real chess tension. Alekhine is shown drunkenly losing to Euwe, then winning the World Championship title back. The controversy of Alekhine’s anti-Semitic articles, titled ‘Aryan and Jewish Chess’, written for the Nazis, is not touched upon. Surprisingly, though, the best scene of the film is one in which Alekhine plays a blindfold simul against Nazi officers. Here, finally, Alekhine’s chess genius is on display, and it is almost painful to imagine how he could keep that number of games in his head. On the other hand, the triumph of the Russian over the Germans fits with Alekhine’s rehabilitated image. 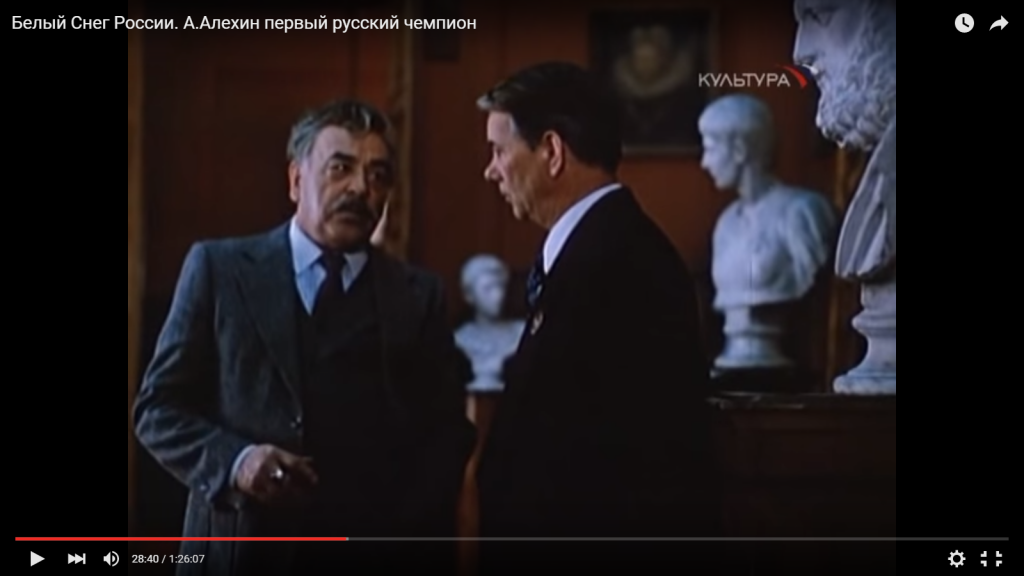 Lasker asking Krylenko if he can live in the Soviet Union

The main theme of the film is that Alekhine constantly dreamed of a return to the Soviet Union, and was tormented by this. In one scene he and another emigre in Paris discuss how the great Russian poets could never have been so inspired if they had been living abroad. Suddenly the man talking to Alekhine produces a Soviet passport from his jacket and announces that he has been forgiven for his bourgeois tendencies and can go home. Emotional violin music accompanies the moment. With tears in his eyes, the man tells Alekhine, ‘This is your path too, Alexander.’

It was not to be, as we know. Alekhine died in Estoril, Portugal in 1946. The chess world had shunned him for his collaboration with the Nazis, but the Soviet Union wanted their new chess hero, Mikhail Botvinnik, to take him on. The match might have gone ahead if Alekhine had lived, but it was probably his alcoholism that killed him. Or perhaps that and his sadness at missing the white snow of Russia.