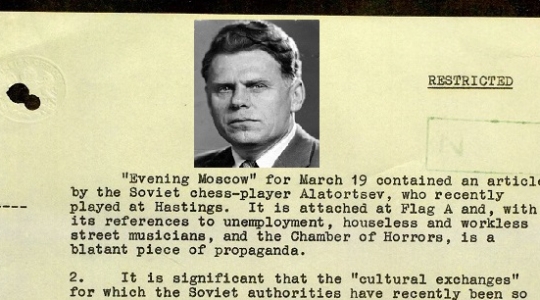 ‘Disgusted with the Chamber of Horrors’

Chess, like many sports, has been used as a political instrument. Files recently released by the National Archives reveal how the Soviet Union exploited chess for propaganda during the early years of the Cold War (1953–1960).

In December 1953, several months after the death of Stalin, David Bronstein (1924–2006) and Alexander Tolush (1910–1969) travelled to Hastings to compete in the Premier tournament. They were accompanied by coach Vladimir Alatortsev (1909–1987), the president of Moscow Chess Club, who is nowadays best known for the variations of the Sicilian and Queen’s Gambit that bear his name. Alatortsev’s role was not only to give the players technical and moral support but also to relay to the Soviet authorities his impressions of ‘the British way of life’.

Alatortsev had first distinguished himself as a propagandist during the Second World War by organising the 1941 Moscow Chess Championships at a time when the city was under heavy German bombardment. The political purpose of staging the event was to counter enemy reports of panic and chaos in the city by trying to convey a sense of normality (to the outside world at least); for the players the tournament was anything but normal as air-raid sirens, anti-aircraft fire and bombing constantly competed with the chess board for their attention.

Alatortsev’s next propaganda success was coordinating chess in military hospitals. Boris Vainstein (1907–1993) of the People’s Ministry for Internal Affairs (NKVD) had enlisted chess in the war effort believing that it would accelerate the recovery of wounded soldiers and instil in them fresh fighting spirit for their return to the front. In 1942 Vainstein appointed Alatortsev to direct a programme of simuls, lectures and tournaments in the hospitals. During the course of the war over two hundred thousand soldiers took part in these activities. 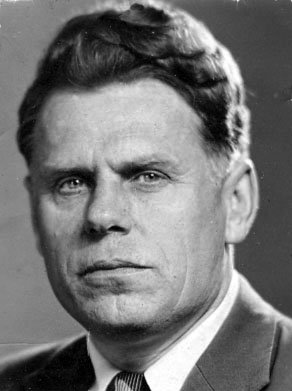 Alatortsev’s best result as a player was finishing second to Botvinnik in the Eighth Soviet Championship in 1933, but by the early 1950s his career had made the gradual descent to writer, coach and administrator.

As the minder of Bronstein and Tolush at Hastings, Alatortsev was charged with writing an account of the trip for his fellow citizens. When the report duly appeared in a Moscow newspaper it raised the interest and eyebrows of J.O. Rennie, an intelligence officer in Whitehall: 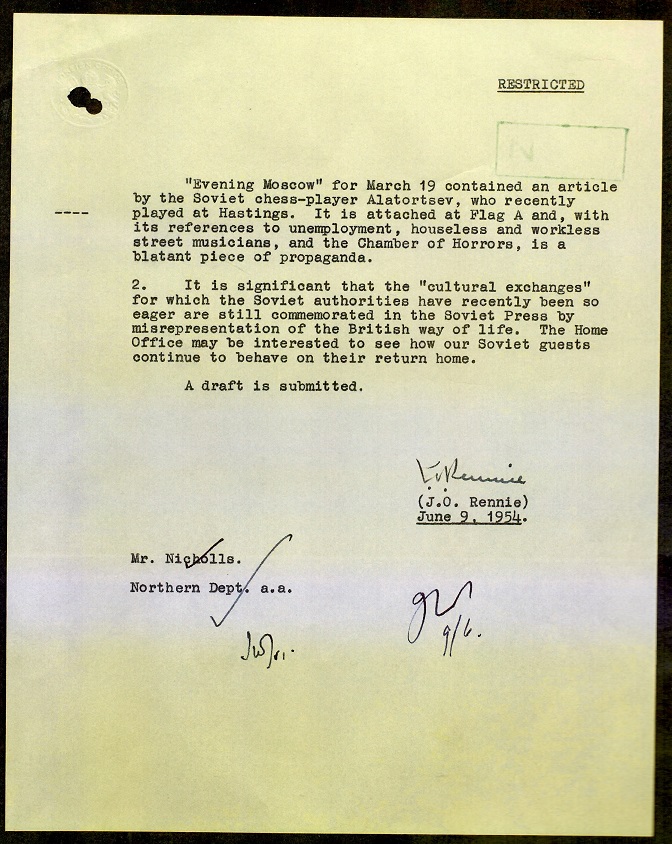 Rennie translated the report for his masters and marked the most offensive passages in the margin of his typescript (here underlined in blue):

On a frosty December morning the Soviet Grand Masters of Chess D. Bronstein, A. Tolush and the author of these lines flew for the traditional tournament in Hastings and that same evening … arrived in London. The capital of Great Britain welcomed us with rain. It was a good thing that we were not in fur coats! We rested from our journey for three days and acquainted ourselves to some extent with London.

The arrival of our Grand Masters evoked great interest in Britain. The “Times” wrote that participation of Soviet chess players in the Hastings tournament was an important event in the history of chess in Britain.

Nowadays Hastings is a small seaside resort. At the height of the season it comprises about 70,000 inhabitants …

The traditional, so-called Christmas tournaments have been held in Hastings since 1895. The first tournament was successfully participated in by the great Russian player M.I. Chigorin, a memorial of whom can be seen in the faded photograph on the wall of the Hastings Chess Club. It was here, on the channel coast that 39 years later the present world champion Mikhail Botvinnik first took part in an international tournament …

The small tournament hall with places for 300 might have been sufficient for us, but in it not one, but ten tournaments were going on at the same time. The participants alone numbered 100! It must be mentioned that apart from the severe ruling – that each game must be finished the same day – the Soviet Grandmasters were not accustomed to playing in the morning, and then in a stuffy, smoke-filled room, which women, accompanied by their dogs often entered during their walk along the promenade …

We, who were used to the splendid conditions under which tournaments are held in the Soviet country, found it strange to see only one indication [sic] board on the stage. But the Master Golombek ran off copies of the bulletins on a hectograph …

At the bookstall the greatest demand was for Soviet chess literature. The twelfth issue of the journal “Chess in the USSR” sold like lightening [sic]. On the cover was a portrait of the clamant to the title of world champion, Grand Master Vasilii Smyslov.

My attention was attracted by a comprehensive work entitled “Chess miniatures” by the author Dumont [sic], who is well known in Britain. We found in it the game of chess played by Lensky and Olga, the heroes of the novel “Evgenii Onegin”, at one time printed in our native literature as a joke. Imagine our surprise when we read that this game had been played in the USSR in 1949! At the end there were even commendatory appraisals of Olga for an outstanding victory.

The newspapers devoted much attention to the “representatives of that great country of chess – Russia”, as the Mayor of Hastings expressed it when opening the tournament, and also published their photographs and the games they played.

On leaving Hastings our delegation returned to London. It must be mentioned that we saw nothing of the famous London fog which Dickens described. The warm and even sunny weather continued, and was very favourable for walks about the city. To be sure, it was always somewhat cold in the hotels. We were always putting shillings in the gas meter. After this the fire gave out precisely one shillings worth of heat.

The Soviet chess players had a look at the sights of London – the majestic Houses of Parliament, the Tower, Hyde Park … they visited the National Gallery to see the wonderful canvases of Reynolds, Gainsborough and Hogarth, and visited the museums, including the notorious Wax-Works. In the latter we were particularly disgusted with the Chamber of Horrors. It includes an actual guillotine. The blade is suspended over the head of the condemned. As though revelling in slaughter, the authors of this “edifying spectacle” did not stop short of depicting all the details of bloodthirsty recriminations. What was striking was that all this is freely shown to the children who visit the museum …

There are no skyscrapers in London. The British do not like high buildings. Only in the commercial centre are clumsy, multi-storeyed buildings to be seen. On the other hand in various districts of London one can see simple one-storeyed bungalows designed for working people.

The industrious British people live in constant fear of the curtailment of production – of employment. That is what induces them to economise on their already meagre resources. Pounds sterling, shillings and pence are put way against a “rainy day”, when there will be no work. A qualified worker earns at most five to six pounds sterling per week. This sum is insufficient to cover the cost of an expensive flat and indispensable foodstuffs. The shops stand empty because of the high cost of living. All that the working people of London can do is to gaze in awe at the beautifully bedecked windows. We were told that one Londoner – houseless and workless Richard Grey, who was brought to court for throwing a brick through a shop window, told the court that he did it simply in order to spend Christmas in jail. “I had nowhere to go”, said Grey, “and I wanted to have a roof over my head and something to eat over Christmas”. In the splendid London thoroughfares, even in Piccadilly which is flooded with electric light, you will seldom nowadays meet with well-dressed persons – they all wear coarse woollen overcoats and cheap suits.

Buckingham Palace preserves the old order of Changing the Guard. The soldiers in bright red uniforms, dark blue trousers and high black fur hats march before the Palace with rifles. Not far away can be heard the splendid melodies of a poor violin player, begging alms from passers-by. One frequently sees such “musicians” at the cinemas. In British cinemas unfortunately, the majority of films are decadent Hollywood productions with revolver shots and half-dressed girls.

Every day we gave talks and played chess …

We Soviet chess players were glad that our short visit to the British Isles will help to strengthen friendship, mutual understanding between the peoples of the Soviet Union and Great Britain, and the cause of peace throughout the world.

Hastings 1953/54 is best known as the setting for Hugh Alexander’s last great tournament performance. He took both of the Russian players to another Chamber of Horrors. Bronstein got the rack for over 100 moves, and Tolush was hanged, drawn and quartered in 28.

‘It was the marathon game against Bronstein which really caught the public imagination. This was played towards the end of the tournament with Bronstein leading Alexander by half a point, and with each successive adjournment it became clearer that there was an excellent prospect of an Englishman stealing the honours from the Russians. The national press gave front-page coverage to the saga, which extended over several days, and London evening papers even gave the adjourned position for readers to study. . . Whether this victory annoyed the Russians in any way is difficult to assess, but they did defeat England 18½–½ in a match the following year (including 10–0 in the first round).’ 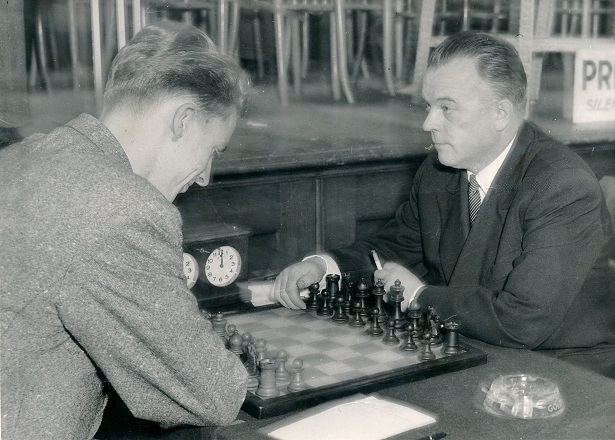 Source: http://www.skaksogufelagid.is (with thanks to Douglas Griffin).

Declaration: the author is an employee of Routledge.