me Kingpin Chess Magazine » ‘The queen ain’t no bitch. She got all the moves.’ 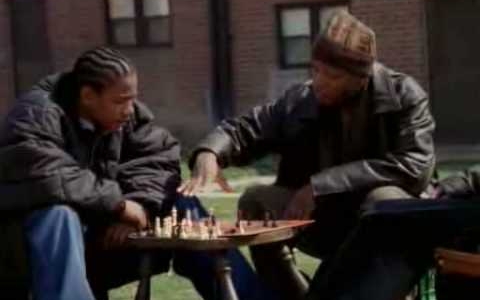 ‘The queen ain’t no bitch. She got all the moves.’

Chess scene from ‘The Wire’

D’Angelo Barksdale: Yo, what was that?

Wallace: Yeah, look at the board. We playing checkers.

D’Angelo Barksdale: Yo, why you playing checkers on a chess set?

Preston ‘Bodie’ Broadus: Yo, why you give a shit?

D’Angelo Barksdale: Now look, check it, it’s simple, it’s simple. See this? This the kingpin, a’ight? And he the man. You get the other dude’s king, you got the game. But he trying to get your king too, so you gotta protect it. Now, the king, he move one space any direction he damn choose, ’cause he’s the king. Like this, this, this, a’ight? But he ain’t got no hustle. But the rest of these motherfuckers on the team, they got his back. And they run so deep, he really ain’t gotta do shit.

D’Angelo Barksdale: Yeah, like my uncle. You see this? This the queen. She smart, she fast. She move any way she want, as far as she want. And she is the go-get-shit-done piece.

Wallace: Remind me of Stringer.

Preston ‘Bodie’ Broadus: True, true, you right. All right, what about them little baldheaded bitches right there?

D’Angelo Barksdale: These right here, these are the pawns. They like the soldiers. They move like this, one space forward only. Except when they fight, then it’s like this. And they like the front lines, they be out in the field.

Wallace: So how do you get to be the king?

D’Angelo Barksdale: It ain’t like that. See, the king stay the king, a’ight? Everything stay who he is. Except for the pawns. Now, if the pawn make it all the way down to the other dude’s side, he get to be queen. And like I said, the queen ain’t no bitch. She got all the moves.

Preston ‘Bodie’ Broadus: A’ight, so if I make it to the other end, I win.

D’Angelo Barksdale: If you catch the other dude’s king and trap it, then you win.

Preston ‘Bodie’ Broadus: A’ight, but if I make it to the end, I’m top dog.

D’Angelo Barksdale: Nah, yo, it ain’t like that. Look, the pawns, man, in the game, they get capped quick. They be out the game early.

Preston ‘Bodie’ Broadus: Unless they some smart-ass pawns.