Chess on the Radio

A recent radio broadcast examined the history of chess on the BBC. Between 1958 and 1964 there were regular chess programmes on the Third Network (now Radio 3), a mixture of essays, interviews and games. Contributors included Alexander, Barden, Euwe, Fischer, Gligoric and Golombek. Some of the games were arranged especially for the programme. The players’ thoughts were recorded during the game and then edited for broadcast. The transcripts were collected in a book. 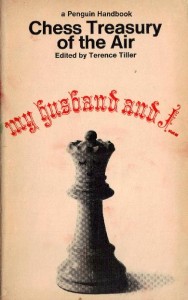 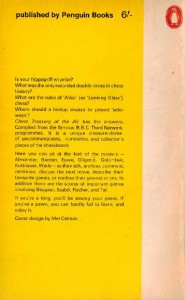 Sportsmanship and Gamesmanship in Chess

. . . cold-blooded gamesmanship planning is rare. But I  have one pretty example. At my first British Championship effort, in 1929, a friend of mine, who is a magnificent analyst, found himself in a very bad position. But there was a way out. Given that his opponent (a very strong player) did not see the threat, it was possible, with a series of sacrifices, to achieve stalemate. But he had to start with a strange-looking king move, which would inevitably warn his opponent. After all, one plays chess on the assumption that the opponent sees everything – that is why the word ‘trap’ is not a good chess term. But my friend devised a psychological trap. He sat and looked at the board with a despairing face until he was well and truly in time trouble. Then he fumblingly made the crucial king move. His opponent, tempted to a little gamesmanship himself, played very quickly. Even quicker came the series of sacrifices, and while the flag was tottering, stalemate supervened. Now, could he have improved on things in the following: made an illegal move – and (as the rules then were) be compelled to move his king? No, he had thought of that, but dismissed it as sharp practice.