Memoirs of a Mediocre Chess Player

Peter Leko. Ian Rogers. Luke McShane. Raymond Keene. Darryl Johansen. John Nunn. I don’t like to name-drop, but these are just some of the stars of world chess that I’ve seen reasonably close-up during my years as a chess player. Heady times, heady times. Some I have seen in the act of playing. Others, such as Australian IM Alex Wohl, I have passed in corridors. I think I remember the Wohl incident most fondly because it is the one time I’ve conversed with a titled player. It’s been a while now, but from what I recall our exchange went something like this:

Like myself, Wohl is Australian, but I find it interesting that in this case he chose to employ the nngh, a traditionally English style of greeting, prevalent on grey days in winter when everyone on the streets or in corridors either looks or is suicidal. What does this signify? Very little, if anything, but before I prise myself away from this subject and move onto something at least faintly relevant, let me just say by way of further gentle mockery of the English, I am also fond of the words ‘aw’ and ‘right’ as they occur in colloquial usage. To wit:

I love the way chess is used by the sporting media as a universal metaphor for struggle. It makes me feel that, somewhere at least, chess is fulfilling some useful function outside the frankly unwholesome and generally despised practice of actually playing the game.

But it is quite astounding how many sportsmen also play chess. There’s the Norwegian ex-international footballer Simen Agdestein, of course, who is also a Grandmaster. There was this guy, Phil, that I used to play tennis against, although to be fair even I could usually beat him. And there are the Turkish weightlifters Halil Mutlu and multiple Olympic champion, the ‘superstar of Turkish lifting’, Naim Suleymanoglu. It’s a little-known fact that the whole Turkish weightlifting team is utterly obsessed with chess, and often play during breaks in training. It gives them a thorough brain workout, the perfect complement to the harsh physical punishment of their normal regime.

As a rule, it’s not easy to gain access to the Turkish weightlifters’ training complex, but recently, prior to the Sydney Olympics, professional sports photographer Jason Bell managed it, and was lucky enough to find Mutlu and Suleymanoglu locking horns across the chess board. As Bell said in the Guardian (Monday, 7 August 2000), in an article about an exhibition of his photography:

‘People don’t think of weightlifting as the most cerebral activity. For some of the pictures I had an idea in my head of what they would look like before I arrived, but other times it would be a huge surprise. This one I didn’t plan at all.’

As a lesson to chessplayers the world over, the position as captured by Bell’s camera can be reproduced here for the first time. 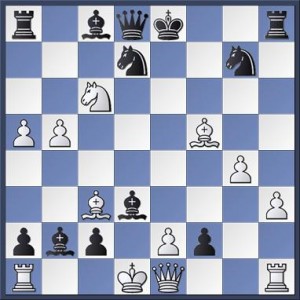 Clearly, from the diagram, the position with Black to move is unclear. Mutlu most likely has the advantage, but how best to ram it mercilessly home? Analysis shows that both …cxd1 and …fxe1 look strong. In fact, in a position such as this, either move would probably confer an edge.

Hats off to Jason Bell, then, for recording such a fascinating chess moment, and also to the Guardian for making that moment public. On the basis of one diagram alone, it’s difficult to know just how strong the Turkish weightlifters actually are, but I think my wife’s cat Tigger would give probably them a run for their money. And if they are as good at weights as they are at chess, Tigger could probably lift more too.

But it is quite astounding how many chess players are also sportsmen, as opposed to sportsmen who also play chess. There’s the Norwegian Grandmaster Simen Agdestein, of course, who played football for his country, and there was this guy, Phil, that I used to play tennis against, although to be fair even I could usually beat him.

Of course, I was kidding when I said that I’ve conversed with only one titled player. I’ve been around a bit more than that. I was at the 1997 Australian Open Championship, held on the mezzanine floor of Sydney’s University of Technology. Being one of the universities I’d dropped out of in the early 1980s, it was a nostalgic time for me. To walk those monstrous, despised halls again brought back a lot of memories which I’d paid good money to have expunged by a licensed hypnotist. Thanks for nothing, Helmut.

The tournament? It was won ultimately by Aussie IM Guy West, the first time he’d taken the crown. I stood there at the rope which had been erected to keep the elite players from breaking out into the normal world and watched as, in fine style, West completed his last-round victory against FM Vladimir Feldman. By coincidence, after the applause had died down, the two of us adjourned to the facilities. We were both pretty exhausted, he after playing, me after the in many ways more arduous task of watching, but we still had the energy to chat. We just stood at the trough and let it all hang out. From what I can recall, our conversation went something like this:

Self: Well done, mate.
West: Thanks.

The chess club was less fun, and the hallucinations weren’t nearly as good, but I put my heart into it. I was in the B team. It was a Sydney-wide competition, and Sydney is, well, wide. From north to south alone there are 40 miles of it. To get to and from the matches, I used to drive round the suburbs at all hours of the night in my beat-up old white Holden station wagon, and this was on top of my various other J-club and pinball activities. The A team flopped big time, but we B guys did great, and made the final.

I remember looking forward to it. I remember going to the chess club noticeboard one day to find out when and where it was on. I remember reading that it had been held the previous week, and that we had lost. We? Actually, it was They. The dumbarses from the A team, who hadn’t been good enough to make their own final, had decided to stack the B team with….er….themselves. Unfortunately for the A team, their opponents North Sydney had done the same thing. Our new B team, which was our A team, got stomped on, just as they had been all season.

But that was it for me. It felt like someone had kicked me in the guts. I quit the chess club. I stopped playing pinball and gave up smoking dope. I even dropped out of university. For a while, I made small protests on a personal scale. I realise now that they were utterly meaningless, but at the time they helped me to cope. I vowed never to watch the A-Team on television again unless there was absolutely nothing else on worth watching. I lobbied TV production companies to make another adventure show, called the B-Team, about a squad of commandos who weren’t actually very skilful and made quite a lot of mistakes. And one by one, I hunted down the members of the Sydney University A chess team and slew them, carving the likeness of a different chess piece into the lifeless torsos of each.

Now, of course, I am older and wiser and know that what happened to me was no big deal, it was just one of those things that happens, and there was no point making a fuss about it in the first place. I also realise that I shouldn’t have left any trademark calling-cards in the twitching bodies, because those things make serial killers a lot easier to track down, no matter how smart they think they are.