I’ve finally decided that playing a competitive game of chess on your birthday is not what it’s cracked up to be. In fact, I’ll be taking measures to ensure this doesn’t happen to me again. It’s all the more painful if it happens to be a critical encounter in an international open in Bad Worishofen, Germany, and you’re up against some complete unknown from Kazakhstan who has zero games on your database.

It seems somehow that normal rules just don’t apply any more. At first you feel invincible. You move quickly and confidently, and wait for your opponent to collapse under the pressure. Except that he doesn’t. Slowly but surely little things start to play on your mind. Every time your opponent plays a half decent move you feel cheated and want to let out an audible groan. Before you start to panic you console yourself with the knowledge that the lousy position you have in front of you really doesn’t matter at all. You fantasise about how your opponent will blunder in the time-scramble, leaving you to remark humorously to your friends that ‘he must have known it was my birthday!’ When your position deteriorates so much that even three blunders in succession would merely give you drawing chances, you suddenly feel the urge to inform your foe of the important date and his moral duty to give you a draw. Realising that this idea is ridiculous and, more to the point, wouldn’t work, you finally resign yourself to another fruitless and pointless birthday.

Trying to sneak into the Dragon variation via an unusual move order, thus avoiding some critical lines. I speculated for a while about trying something unusual before deciding that I should play safe after all. 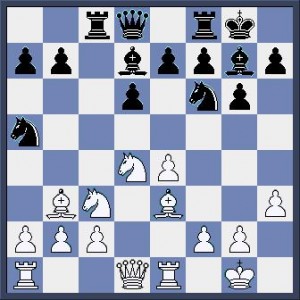 A totally unacceptable move, played of course without too much thought. Still, I get away with these things you know. He just won’t take that e-pawn. I was once lucky enough to witness the post-mortem analysis of a game between Angus Dunnington and Glenn Flear in Le Touquet. On reaching a position which was slightly but clearly inferior for him, Glenn insisted that he was playing for the win. This statement mystified me until he backed it up with ‘I am the Grandmaster after all’. The same rule applies here. My opponent should ponder the consequences of taking the pawn for a couple of minutes, decide it’s way too complicated and defer to my grandmasterly judgement. I just look calm and furiously pretend to analyse 13…Nxd5 as if it’s the only legal move. Why is he thinking so long? Oh please don’t think, just move!

‘Yeah great, well spotted sir – you can grab that pawn after all. Let’s go back a move, shall we? I’ll play 13 Qd3 and we’ll start again.’

‘Have you ever lost to someone who then compounds the horror of your defeat by playing like a joker, losing the rest of their games in a miserable fashion?’

The secret is in the timing of this move. Played too quickly it looks like blind panic, whereas too slowly and it’s obvious White has nothing better to do. Now I’m sure my opponent won’t realise that I’ve simply offloaded a priceless centre pawn for a worthless wing pawn. It’s time to give him the ‘I’ve-got-a-threatening-position-and-it’s-my-birthday’ glare.

Now this is just plain silly. What do you think you’re up to? Feel free to play some bad moves, won’t you?

This move comes all the way from the old Soviet School of Chess and says ‘You gave away your e-pawn and will be punished accordingly’. Or maybe it simply says ‘Strrructure’.

Unfortunately for me I’m now entering a ‘pointless swindle situation’. In a normal swindle your opponent’s most obvious move may in fact be a blunder. Here it’s the complete reverse. His most obvious moves are in fact the best and only his most ridiculous options don’t work.

Er… I claim compensation for having a lost position. 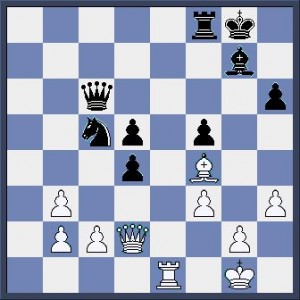 The old Soviet School is working overtime once more. Just try and look nonchalant. In a couple of moves I’ll claim a draw as it’s the ‘wrong coloured bishop’.

Not fazed at all by my measured counter-attack, my opponent gets all materialistic on me and forces resignation. Such an enjoyable game, sir!
0-1

Have you ever lost to someone who then compounds the horror of your defeat by playing like a joker, losing the rest of their games in a miserable fashion? You know the feeling. I spent too much of the following day watching Khalifman–Katalymov. After the moves 1 d4 c5 2 d5 e6 3 Nc3 exd5 4 Nxd5 Ne7 5 Bg5 h6 6 Bf6!

I thought, ‘Here we go, the same old story’. To his credit, Mr Katalymov went on to prove me wrong by frustrating Khalifman and drawing with ease. The fact that Katalymov went down in a ball of flames in his final game is irrelevant since he’d already proved his point, hadn’t he?