Confessions of a British Nightclubber

Browsing a copy of Chess Monthly, I was interested to read Chris Ward revealing his thoughts during his game with Jonathan Levitt from the penultimate round of last year’s British Championship. Having reached a very promising middlegame position Chris started to daydream. I hand you over to the man himself:

‘. . . Jonathan Parker was going to hold the draw against Matthew Sadler and so I was (after a few minor formalities) going to be half a point clear with only a round to play. . . in all probability I would play Aaron Summerscale in the last round. As his typical British Championship evening activities (usually involving the odd drink!) surely had to catch up with him sometime and besides I had 3.5 in our previous 4 clashes, basically my main concern should be preparing my Saturday morning winner’s speech!’

On reading this I was dumbfounded. It was not the fact that Chris expected to beat me that caused my jaw to drop  but the fact that he thought my having ‘the odd drink’ would be a contributing factor. For me the British Championships have always been a very enjoyable occasion where I can get together with some of my closest friends and add considerably to the trade of the local publicans. It has become a tradition at ‘the British’ to paint the town red by night. If things don’t go according to plan over the board, perhaps you will have better luck in the local nightclubs.

I’ve decided not to torture you with the game that won me second place. It was as dull as ditchwater and it took me a very painful 6.5 hours to turn Chris’s dream into a nightmare. Instead I offer you a game from the Championship in 1992 that I enjoyed almost as much as the nightlife. It should also have sent a warning salvo to Mr Ward about the dangers of underestimating your opponent.

In 1992 I was fairly inexperienced with the Semi Slav and so decided to try to get Chris out of his book. After the debauchery of Friday night the last thing I needed was to be rattled by the latest improvement in the main line. In fact I wasn’t even sure what the main line was!

At this stage I really was quite happy with my position. My opponent now had ‘hanging pawns’ and I felt sure this had to be a good thing. Maybe these IMs weren’t all they were cracked up to be.

Through patient manoeuvring Chris has managed to build up his kingside attack and now has a direct threat. I remembered having read somewhere that it is better not to make pawn moves in front of your king when he is under fire, so I decided to try to blunt White’s attack in the recommended way: by exchanging pieces.

Well, all going to plan so far, I thought naively. Hasn’t anyone ever told this boy about bishops being better than knights? First he gives himself hanging pawns, then he goes exchanging his best attacking pieces. Automatically I remembered another, and in this case fatal, maxim: ‘Capture with your pawns towards the centre’.

Normally I would have got up to walk around at this point, feeling very pleased with myself for having got the advantage. Should I press for the full point or cash in and offer a draw to my more illustrious opponent? As I moved my chair back I caught a look of glee in Chris’s eye that chilled me to the bone. Only now did I realise the enormity of my crimes against the chessboard as he bashed out . . . 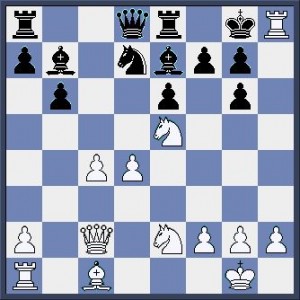 I wished the ground would open up and swallow me. Chris pushed his chair back and went for a stroll. Like every other mug who has found himself in such an unenviable position, I had a very important choice to make: resign now and ease the pain by making my way swiftly to the bar or play on in order to avoid a spot in the next book on miniatures. I thought about the more attractive first option but I knew that in order to savour my drink I would have to make a plan of revenge. At what could I challenge Chris to restore my ego? Maybe a showdown on the local disco dancefloor? But what if Chris won on the floor as he had in the game – in all likelihood he would probably get the girl as well. I knew he had been taking ballroom dancing lessons. His football skills were pretty silky as well. There was only one thing for it. Pray!

Chris returned to the board and gave me a look of disgust: why did he have to play these patzers who couldn’t accept when they were beaten? I sat slumped in my chair with a sudden headache, not helped by the knowing smiles of all those who passed my board.

I played this move and resolved to resign at move 40 if he made the time control. He had a whole half hour left but it gave me a goal to play towards. Strangely, though, from this moment on he began to consume large quantities of time. Maybe he still had one eye on the miniature and was looking for the most brilliant win, but from now on I defended resolutely.

I now felt a flicker of hope. Sure, the position is still lost for Black but I had survived the dreaded 25-move miniature mark and my position had certainly improved. I don’t know what made Chris want to swap his d-pawn for my a-pawn, but I was most grateful. The knight on h3 looks a little offside and, what was more, he now had less than 10 minutes left.

Played with a flourish as if to say, ‘I can make threats too’. Chris didn’t look too convinced but his clock ticked on.

Chris starts to panic here and is obviously trying to relieve some tension through exchanges, but this just brings another black piece towards his king.

He probably thought he was moving his king to a safer square. I relaxed now knowing that he had missed my next move which puts Black firmly back in the game.

It was perhaps unfair of me to push my chair back and go for a stroll as Chris now had less than five minutes to make move 40, but I couldn’t resist it. The bishop is immune from capture, of course, because of the weakness of White’s back rank.

Maximum confusion! Chris looked left and right not knowing where to move. With his flag beginning to rise he reached out and grabbed his rook.

Now Black is firmly in the driver’s seat and Chris began to turn red. I almost felt sorry for him.

Black is winning at least a piece. I leave the last word to Chris: ‘Sadly, as is too often the case, I took no heed of sayings about hatching chickens.’ 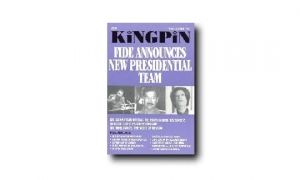